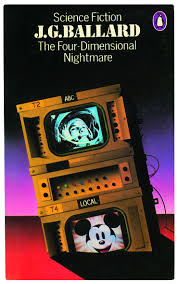 Short stories were never going to be the driving force of Ballard's fiction. They were just something he wrote to get into print and build a readership. This 1977 Penguin collection is an oddity even for Ballard. Two of the stories in the version originally published by Gollancz in 1963 have been replaced. To be fair, one of the replacements, "Thirteen to Centaurus", is one of the standout stories here. The other, "The Overloaded Man", is however completely forgettable.

As for the rest, time is a recurring theme. "The Voices of Time" and "The Garden of Time" rather speak for themselves, and "Chronopolis" isn't exactly oblique in its subject matter. I actually enjoyed all three. The length of the first allows for complexity and ambiguity, which I find Ballard always does rather well, whereas the shortness and simplicity of the second tilted it more towards fantasy, which Ballard does hardly at all. "Chronopolis" would be a classic short story in any collection with its brutal, sardonic twist.

Both "Chronopolis" and "Thirteen to Centaurus" feature clever and lonely young boys as protagonists. Empire of the Sun, which I consider Ballard's masterpiece, of course tells the tale of young Jim. I really wish he had used the young boy character more often. You can forgive a teenager his or her obsessions, whereas the grown men of High Rise and Kingdom Come can be downright unpleasant.

Two of the three remaining stories, "Cage of Sand" and "The Watch-Towers", share the abandoned city setting of "Chronopolis". I preferred the former, which is set on Mars, where a handful of hangers-on gather to watch the regular orbit of the capsule with a dead astronaut in it.

My favourite in the collection, though, has to "The Sound-Sweep". The over-developed world has become so noisy that people are employed to sweep away extraneous noise. The mute Mangon has a particular gift for tracking down and erasing the slightest lurking murmur. In his spare time he pays court to the forgotten operatic diva Madame Gioconda. No one listens to live music now. The fashion is for


Ultrasonic music, employing a vastly greater range of octaves, chords and chromatic scales than are audible by the human ear [which] provided a direct neural link between the sound stream and the auditory lobes, generating an apparently sourceless sensation of harmony, rhythm, cadence and melody uncontaminated by the noise and vibration of audible music.

Now that is exactly the sort of fiendish construct that gets the very best out of Ballard!
Posted by rogerwood at 17:15