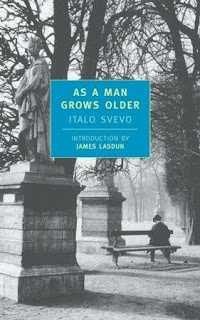 Svevo's story is unique. As a young man in Trieste he wrote two unsuccessful novels, of which this is the second. In middle age he befriended a young Irishman living in the city. He happened to mention his writing. The young man happened to be James Joyce. A decade later, the now famous Joyce found a publisher for Svevo's third novel, The Confessions of Zeno, which was published with great success in 1923, thereby encouraging English language translations of the earlier novels including this, in 1932, by Beryl de Zoete. Svevo had finished a fourth book and started a fifth when he died in a car crash in 1928. I'm guessing the car was the product of his belated success. And his name wasn't Italo Svevo anyway. He was Ettore Schmitz. Nonetheless his widow called herself Livia Svevo when she published a memoir of her husband.

Emilio Brentani, the hero of As a Man Grows Older, is a self-portrait. Like Svevo he aspired to literary success when young and missed. He now has a dreary office job and lives with his spinster sister Amalia, in Trieste, of course; nowhere could be better suited to this nowhere nobody. Emilio still considers himself an artistic man about town. He cultivates artistic friends like the sculptor Balli and - the modernist touch which appealed to Joyce - he overindulges in fashionable self-scrutiny. Every action, every emotion is gone over and over in his head, almost as if he is living an autobiographical novel. When he falls head over heels for the beautiful young Angiolina he builds himself a mountain of reasons why he shouldn't. His friend Balli, who fancies Angiolina himself and, in any case, doesn't want to lose his friend Emilio, encourages his neurotic behaviour. Emilio's sister Amalia, the only other significant character in the novel, likewise frets about losing her protector whilst consoling herself with erotic dreams of the flamboyant alpha male Balli. Angiolini couldn't care less. She is a poor young woman who knows that her beauty is her escape. She has had plenty of suitors before and makes no attempt to hide them. Emilio gets so tangled up in his strategems that he encourages her to become engaged to an unscrupulous tailor. He encourages her to sleep with her fiance so that he, Emilio, doesn't have to shoulder the guilt of deflowering her. Angiolina has no problem with this; her virginity is a distant memory - and, of course, the tailor dumps her the moment he has had his wicked way.

It is plain, spinsterish Amalia who pays the heaviest price for all this neurasthenic nonsense. Emilio comes home one day to find her literally deranged with frustrated passion. Emilio at least has the human decency to look after his sister, though not without asking Balli's advice first and accepting the medical guidance of Balli's friend, who cheerfully admits he has no idea what he is doing. It doesn't end well. Angiolina, meanwhile, has eloped with a cashier who has prudently robbed his own bank. Even then Emilio has to go through an elaborately staged charade of him abandoning her.

The novel is light but very modern in its time and still entertaining today. It is nothing like a Joyce novel but you can easily see what appealed to him here. Svevo is a writer who deservedly stands on his own, a unique voice unfairly forgotten.
Posted by rogerwood at 14:28