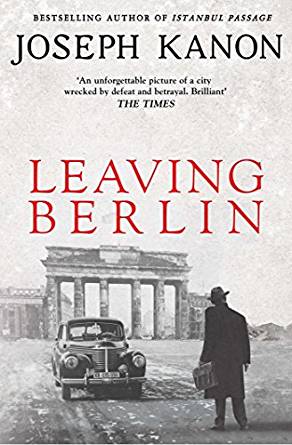 Joseph Kanon is perhaps best known for The Good German (2001), which I confused with the terrible film The Good Shepherd and therefore overlooked.


Fortunately I looked again when I saw Leaving Berlin on the shelf at my local library. This is Kanon's latest novel, the story of a half-Jewish German author who fled to America after Hitler came to power but who has now effectively been deported for refusing to testify to the House Un-American Activities Committee. Alex hasn't even left before he is offered a lifeline by the embryonic post-war spy service - work for us in Berlin and we'll back your appeal.


What makes this novel really zing is that Alex has been invited back to East Berlin during the Russian blockade and the Allied airlift. As a successful author he is feted alongside Bertholt Brecht. Indeed, the climactic action takes place during the world premiere of Mother Courage.


Of course Alex is an equally enticing target for the Russian Occupation Forces. His first love, the aristocratic Elspeth, is now the mistress of the second most important Russian in town. Her sister and her husband are ex-Nazis anxious to repudiate their past. Elspeth's brother has just escaped from the slave camps. The brother of Elspeth's lost love - the boy she flaunted in front of the teenage  Alex - has grown up to become an officer of the civilian police force in Berlin. Everything is thoroughly internecine and everybody, without exception, is pretending to be something they are not.


The plotting is superb. The twists keep coming, right up to the last page. The characterisation and dialogue are extremely well done. The prose is refined, elegant, and perfectly suited to the story. Kanon is wholly American but his depiction of East Berlin in 1949 is utterly convincing. I am not the first to be reminded of John le Carre. Unlike le Carre, Kanon claims no personal involvement in Cold War espionage, but a lifetime in high-end publishing more than compensates. He is a magnificent writer, a new entry for the New Year on my list of must-read authors.
Posted by rogerwood at 16:22