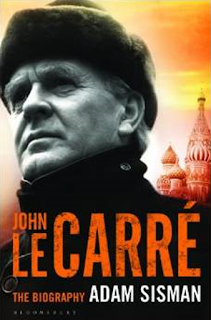 There are a couple of problems that writing a biography of a still living, still practicing creative artist always present. Additional problems face the biographer of an artist who is, to a certain extent, a fictional construct in his own right.

Le Carre is, of course, a pseudonym. In the early days, when interviewed in the le Carre persona, David Cornwall gave conflicting accounts of his secret service experience. Since then he has channeled enormous amounts of autobiographical material into his fiction, especially concerning his scapegrace father Ronnie, who crops up all over the place and is the dominant character in le Carre's most autobiographical (and for me, most exhausting novel) A Perfect Spy, which I have been wrestling with for months. The Perfect Spy was le Carre's thoroughgoing attempt to purge the Ronnie factor from his life. It is also in many ways his last Cold War novel. And that is where, in an ideal world, Sisman should have left it.

Sadly he gives us another 200 pages of the later career, which le Carre has spent anatomising the state-controlled corruption of globalisation with its arbitrary wars and exploitation of so-called 'emerging economies'. How can anyone take a view on a work so vividly in progress? Who can say how it has effected its creator while the creator is still creating? Well Sisman can't, that's for sure. Instead we get 200 pages of what is essentially tactics and results - le Carre's regular switches of agent and publisher, the setting up and closing down of the company to manage his copyright and royalties, the production company he now owns with his sons, and swathes of reviews from all the usual suspects. My teeth positively ached when Sisman gave us the petty feud between le Carre and Salman Rushdie, now happily resolved.

It is, of course, an authorised biography. Le Carre worked with Sisman as, throughout his career, he has worked with scriptwriters on the films of his books. The question arises, how truthful is le Carre? How truthful can anyone be who has so thoroughly fictionalised his own life? Sisman himself makes the point towards the end: David Copperfield, he reminds us, was Dickens' most autobiographical novel, but that doesn't make it autobiography. With le Carre the question becomes even more complicated because no sooner had Sisman's breezeblock landed in 2015 than le Carre published his own 'autobiography' The Pigeon Tunnel, which is next on my reading list. Funnily enough, Sisman describes an earlier attempt by le Carre to anthologise the various autobiographical fragments he has produced over the years. Le Carre abandoned the project. Is The Pigeon Tunnel the same material reworked? We shall soon see.

As for this, like so much of le Carre's middle period output, especially The Perfect Spy, it is much too long. I nevertheless warmed to character of David Cornwell, still furious after more than fifty years. And I warmed somewhat towards Sisman who scrupulously (unlike so many contemporary biographers) left himself out of the story. It is the definitive biography to date. It would have been a lot better in two volumes.