It has been almost a fortnight since my last post. The delay is not because I'm reading some colossus of a book (though I now am) or that I've been wasting eyesight on a book I cast aside before finishing. It's because I did finish Anansi Boys, perhaps against my inclination,
Now, to be clear, I am a huge fan of Neil Gaiman. I adored Neverwhere and Black Orchid frazzled my brain. Anansi Boys, though... 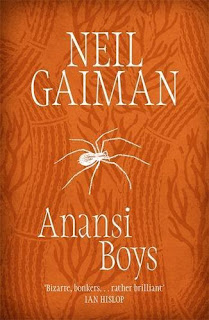 Essentially it is a mechanistic farce - a limited number of characters forever popping up in one another's lives. Improbability is the whole point of farce, which is one reason it doesn't greatly appeal to me. And, to be absolutely fair, Gaiman does offer some justification through the context of Caribbean mythology. After all, if events didn't come across as wildly improbable, how would we know the gods are involved?

The book has its funny moments, lots of them, some of which made me laugh out loud, which I rarely do. The problem was I couldn't really care about these people. And that is, I suspect, because Gaiman has erred in choosing an almost entirely Caribbean cast of characters. Gaiman is not of Afro-Caribbean ethnicity and neither am I. How can we possibly understand the particular complexities of the lives of Afro-Caribbeans and their communities? Sure, we can research their mythology - and Gaiman handles this aspect with aplomb - but Fat Charlie and his circle live in contemporary Florida, London and on a fictional island. In the first two locales they definitely face challenges which Gaiman and I don't.

Again, let me be clear, there is no hint of racism here. Gaiman clearly likes all his characters. But for me that's not quite enough. The characters are lacking a context. That leads inescapably to a lack of three-dimensionality and character progression.

The other problem is the lack of jeopardy. In a farce, the jeopardy is usually the potential loss of the true love. Charlie's girlfriend Rosie is not the one he should be with, so losing her is the right thing, whereas the true love, Daisy, is right alongside from Charlie from early on. In fact, he can't lose her even when he wants to.

So there it is, the reason for my reluctance to blog about Anansi Boys. It won't stop me reading more Gaiman, not by a long chalk. It is not a bad book: it is expertly written, bowls along, with jokes. It just lacks that element of fantasy which for me is essential - believability.
Posted by rogerwood at 19:50