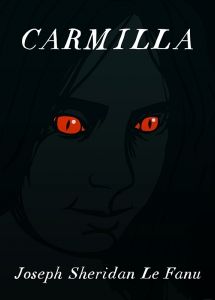 Perfect for Christmas night reading, Carmilla is effectively the mother of Dracula. John Polidori was the father, with Lord Byron a sort of fairy godfather. Polidori's The Vampyre came out in 1819, originally credited to Byron in the hope of bigger sales. In fact The Vampyre was Byron, thinly veiled under the name Lord Ruthven, the name he had appeared under in Glenarvon (1816), a scandalous bodice-ripper by Byron's spurned mistress Lady Caroline Lamb. Carmilla - likewise a novella - came out in 1871 and derives from the legend of Hungarian noblewoman Elizabeth Bathory, who is said to have preserved her beauty by bathing in the blood of young virgins. A quarter of a century later along came Bram Stoker to combine to two - all he needed to find was another medieval Eastern European blood fiend, preferably one with a catchy name.

Stoker was a Dubliner, like le Fanu, and it is inconceivable that he should not have known Carmilla. He was working, in Dublin, for a newspaper co-owned by le Fanu when the story came out in serial form in late 1871. He may or may not have known of Polidori. The term 'vampire' was not original and indeed is deployed in Carmilla. Modern screen Draculas may have a whiff of Byron about them but Stoker's Dracula, in the novel, does not. Indeed the only thing Stoker seems to have added to what le Fanu supplied, aside from material lifted from the life of Vlad Tepez, is the vampiric means of transmission. The bite itself passing on the contagion seems original to Stoker. Le Fanu has some obscure device of vampires infecting suicides and I'm not sure that the question of transmission arises in Polidori (it certainly doesn't in Byron's 'fragment' "The Burial".

Carmilla was written at the very end of le Fanu's life, by which time you would hope he had developed a graceful turn of phrase. Sadly, a lifetime's slog as a journalistic hack seems to have undermined his prose, which plods somewhat. On the other hand his structure is very clever, a story within a framework, which then admits other stories. The frisson that made it successful, however, is the implied lesbianism between Carmilla and the narrator Laura. Given that Laura speaks to us directly we can be safe in the assumption she did not die. The victim is Berthe, ward of General Spielsdorf, the neighbour and friend of Laura's father in Styria. We only see Carmilla as beautiful and loving and extremely sexual. It is Spielsdorf who later reveals what she really is and how she must be destroyed - which, incidentally, is done in the way familiar to all Dracula fans. The learned man who assists at the destruction is Baron Vordenburg of Graz, who is described thus:

He was tall, narrow-chested, stooping, with high shoulders, and dressed in black. His face was brown and dried in with deep furrows; he wore an oddly-shaped hat with a broad leaf. His hair, long and grizzled, hung on his shoulders. He wore a pair of gold spectacles, and walked slowly, with an odd shambling gait, with his face sometimes turned up to the sky, and sometimes bowed down toward the ground, and seemed to wear a perpetual smile; his long thin arms were swinging, and his lank hands, in old black gloves ever so much too wide for them, waving and gesticulating in utter abstraction.

Small wonder, then, that Stoker preferred to combine Vordenburg's knowledge of vampiric lore with the more reassuring professional person of Doctor Hesselius. to whom Laura's narrative is addressed - et voila, Van Helsing!


Le Fanu doesn't do bats but there is an animal entity. In the most horrific passage of the novella a monstrous cat - 'four or five feet long' - pounces on Laura's bed.


The two broad eyes approached my face, and suddenly I felt a stinging pain as if two large needles darted, an inch or two apart, deep into my breast. I waked with a scream.

Intriguingly, le Fanu leaves a major question unanswered - who is the mysterious 'Countess' who claims to be Carmilla's mother but who dumps her daughter first on Spielsdorf, then on Laura's father. She meets Spielsdorf at a masked ball and refuses to unmask for him because. she insists, he will recognise her. Did le Fanu simply forget? I doubt it; the encounters with the Countess are allotted too much space within the hundred pages of the novella. Perhaps le Fanu planned to bring her back in a follow-up story. After all, Carmilla was one of five stories published in In A Glass Darkly (1872), all of which were presented as being from the papers of Doctor Hesselius, who thus became the first occult detective. Sadly, le Fanu died early the following year before he could publish more.