Ted Hughes: The Life of a Poet - Elaine Feinstein 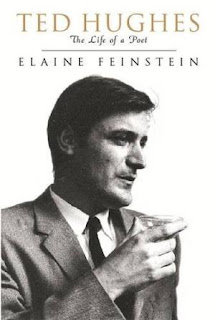 Published in 2001, this was the first full-length biography of the enigmatic Hughes. As such, it laid out the groundplan which others have since followed. A fair bit of detail about the childhood years, a long account of the six-year marriage to Sylvia Plath, and a brisk canter through the remaining thirty-five years.


Feinstein is herself a poet, thus her insights into Ted's work are particularly valuable. She was a friend of Ted and fellow client of his sister/agent Olwyn. As such, she provides a welcome counterbalance to many of the more militant accounts from the pro-Plath camp. Whilst she does rather gallop through the second half of Hughes's career, she nevertheless takes due time to consider and evaluate the stream of work he maintained. She even delves into areas that few others mention - his prose work, for example, notably the vast Shakespeare and the Goddess of Complete Being. She is frank in her depiction of the always controversial Olwyn and generous in her account of Carol, Ted's second wife. Ted's death, which was fresh in her mind when she wrote the book, is profoundly moving.


The only area in which I take exception is a series of broad and unsupported generalisations which for reasons unknown Feinstein makes about Northern men and their attitude to women. It is an area in which I may be better qualified, being myself a Northern man, a generation younger than Hughes, admittedly, but from the next valley along with most of my ancestry from the same valley as him. I even share his South Yorkshire connections. And I can assure Feinstein that, in my experience, she could not be more wrong in her assumptions about the term 'mother' when used as a synonym for 'wife'.


With that proviso, which is of course always open to argument, there can be no better place to start delving into the life of England's greatest poet of the late Twentieth Century.
Posted by rogerwood at 14:39