Slade House is a traditional English haunted house story disassembled, dissected, twisted and tweaked by a master of literary tropes. Mitchell favours multi-viewpoint narratives and has made Slade House the perfect vehicle for the technique. Every nine years, over five cycles from 1979 to 2015, innocents and/or investigators are enticed to the suburban mansion that was once Slade House. Some are linked, others independent. On every occasion we and they have to try and disentangle what is real and what is not. Piecemeal throughout the novel suggestions are offered regarding the origin of the 'orison'; only at the end is the full story revealed. 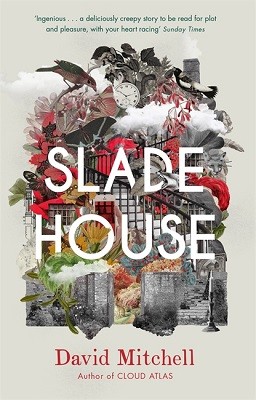 Mitchell has previously been drawn to the epic format. Here, the shorter form (only 230 pages) suits his purpose better. For Mitchell, it seems to me, form and structure matter more than elegant wordplay. His words are well-chosen, his sentences polished, but he leaves the complexities to ideas which are by their nature labyrinthine. The orison, for example, is a concept Mitchell developed in his earlier novel Cloud Atlas, a sort of spiritual or supra-natural version of virtual reality. Here he traces the idea from various esoteric belief systems. Whether there is any basis for this in real world religious practice is immaterial. It reads as plausible, even authoritative, and thus the reader accepts it.

For all the structural bias, Mitchell creates characters who hold our interest for as long as they need to. The guileless son of a pretentious single mother, a libidinous copper, a chubby fresher from the local university, her sister the online reporter and, ultimately, the kick-ass doctor of psychiatry. The interdependency of the Grayer twins, whose career unites the episodic narrative, is especially well handled.

I liked this novel a great deal. I commend it to all.
Posted by rogerwood at 15:05