The Extraordinary Voyage of Pytheas the Greek - Barry Cuncliffe

I don't remember when I first heard about Pytheas - it was more than thirty years ago and it may even have been via one of Barry Cunliffe's other books. I have been fascinated ever since. 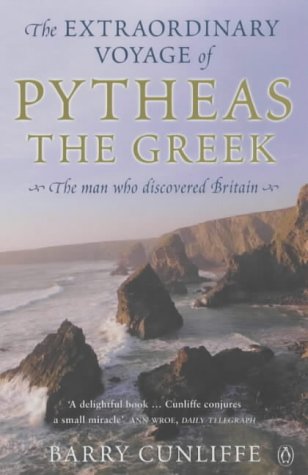 Pytheas is said to have been the first man to circumnavigate the island of Britain and leave a record of his voyage. This was around 350 BC. Beyond that, we stray into less certain ground. For a start, Pytheas wasn't really a Greek. He was a citizen of the Greek maritime colony of Massalia, modern Marseilles. His book, On the Ocean, has not survived. What we know of it is quoted or referenced by later writers - some of them, like Pliny, more than four hundred years later. Others like Strabo, writing about the time of Christ's birth, only quoted Pytheas to demonstrate what a fantasist he was. Strabo, however, was an armchair geographer, writing in the declining, decadent years of Greek culture, whereas Pytheas was a son of the Great Expansion and claimed to have seen the far-off islands for himself. What clinches Pytheas's story for me is that he was a merchant on the make - he wanted to explore Britain in the hope of turning a profit. That rings true.

Pytheas also claimed to have visited Ultima Thule, an island north of Britain regarded as the last habitable outpost of humanity. Cunliffe explores the various possibilities. Was it Iceland, Norway, one of the Danish islands or one of the Faroes? The truth is we will never know. I accept without question that it was possible to get to Iceland from the north of Scotland in the vessels used at the time - boats and ships did not change greatly in the North for another fifteen hundred years and we know that early medieval travellers made it to Greenland and even North America. I question if it was Iceland, though. Iceland is so very different; anyone who landed there could not avoid noticing the difference (and there was no point going anywhere if you did not at least try to make landfall). On the other hand we do not have Pytheas's original text. We do not even have quotations from it that are 100% reliable. It is all a matter of judgement. Cunliffe is a scholar of history, the greatest scholar of Celtic Britain, a hands-on field archeologist; for him ancient texts are simply possible clues to new discoveries on (or in) the ground. Pytheas, of course, did most of his exploration on the water, where no trace will ever be found.

Cunliffe's other great gift is his writing ability. He never simplifies for the sake of making a cheap point, nor does he bombard the reader with unnecessary scholarship. His desire is to bring Celtic Europe to life for everyone. And he does that here brilliantly.
Posted by rogerwood at 16:11