A Sense of Wonder - John Wyndham and others

This collection of three sci-fi novellas put together and introduced by the arch-anthologist in the genre, Sam Moskowitz, can claim to have re-discovered John Wyndham's early story 'Exiles on Asperus'  (1933). Wyndham's estate only published it in 1979, ten years after his death, but here it is in 1976 with Moskowitz claiming it is the first publication in book form, which may very well be true. 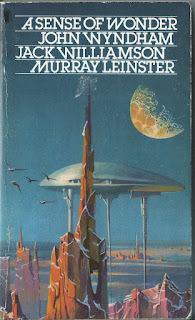 Wyndham was 30 when he wrote it, still writing for genre magazines, in this case Wonder Stories Quarterly under a different variation of his name, John Benyon Harris. Moskowitz's point is that the three stories go beyond a sense of the fantastical into a sense of wonder. In other words, they ask mature questions like what is technology for, and what effect will scientific advances have on human nature. I would add the suggestion that the length they have to play with (each runs roughly 50 pages in paperback) allowed them to ask such questions and develop more rounded characters.


In any event, Wyndham's story is, as you would expect, the best of the three. By 2077 Earth has colonised the Solar System (we'd better get a move on then). It is an empire not unlike the British Empire, which did some good things and some appalling things. The Martians, who are regarded as semi-human, have rebelled and been suppressed. The Argenta is transporting some of the ringleaders to a penal colony. They are holed by a message rocket, the 21st century equivalent of a message in a bottle. The message was sent out 25 years earlier by the captain of the Red Glory, wrecked on the planetoid Asperus. It is perfectly possible that the castaways are still there. The Argenta lands to investigate.


The crew are indeed still there. They have bred a second and a third generation. Also resident are the Batrachs, an alien race of bat-like creatures who control the humans, using them to carry out tasks which their wings prevent the Batrachs doing for themselves. So far so predictable. We assume, along with the crew of the Argenta, that the humans want liberating. Without giving too much away, let's just say it comes down to mind control through conditioning. Mussolini was already in power when Wyndham wrote this story; Hitler was on the rise and in Britain the Daily Mail was backing Moseley's Blackshirts. The horrors of the Holocaust were still to come, thus Wyndham reflected a world in which fascism was seen as a possible solution. And that moves 'Exiles on Asperus' into another league entirely.


Murray Leinster's 'The Mole Pirate' and 'The Moon Era' by Jack Williamson suffer by comparison. They don't really ask such big questions and are limited by being earthbound in the former and driven by the prospect of cash rather than wonder in the latter. That is not to say that they do not have their moments.


Leinster (real name William F Jenkins 1896-1975) was a prolific writer of pulp fiction. His mole is a machine which can dematerialise and pass through solid matter. Rather than use it for something significant, it is hijacked and used for bank robbery. There is, however, a fabulously imaginative sequence when inventor Jack Hill is kicked out of the dematerialised mole with nothing but a pair of radioactive snow shoes to prevent him falling through the Earth.


Williamson (1908-2006) was notable rather for those he inspired (Asimov, Pohl etc.) than the stories themselves. He was only 23 when he wrote 'The Moon Era' so it is not surprising that his hero, Stephen Conway, is driven by the primal impulses of financial security and sex. His inventor uncle offers to make him heir to his millions if Stephen will test-fly his latest and greatest invention, an anti-gravity machine that should fly to the moon inside a week.


I enjoyed the concept of a space capsule that basically falls off the Earth. The twist is that it also goes back in time, aeons over the course of a week, landing on a Moon that still supported life forms. Stephen encounters the last surviving female of the pure moonlings. They strike up a relationship in order to escape the impure moonlings, who live in machines, a sort of splicing of H G Well's Martian invaders and the Daleks. It is the totally alien nature of the Mother which sets Williamson's story apart, especially the way in which despite her otherness she and Stephen manage to establish a convincing relationship.
Posted by rogerwood at 15:05