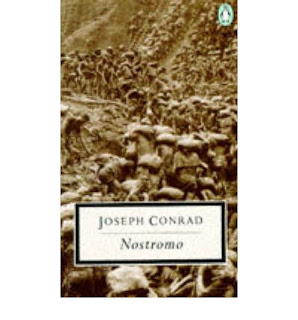 The deeper I got into Nostromo, the more I was reminded of Camus' The Plague. Both dissect closed societies under stress; both share a preoccupation with moral corruption. Just as The Plague isn't really about the epidemic, so Nostromo isn't really about the title character, who barely appears in the first half of the 450-page book, or even about the San Tome silver mine which infects the lives of everyone in the enclave of Costaguana.  The plague bacillus and the silver mine are merely the causative agents of their respective stories, Nostromo the symptom.

Conrad's theme - certainly the theme of Nostromo and The Heart of Darkness - is the corruption of imperialist capitalism. I suppose, in a sense, it is also the theme of The Secret Agent in so far as imperialism and capitalism are what the anarchists seek to overthrow. Conrad, it seems to me, has no problem with Western powers seeking to 'civilise' the indigenous populations of Africa and South America. Despite the notorious title of one of his novels, Conrad does not strike me as racist in the context of his time. His natives are not debased or in any way contemptible. To help them with work and education is, he seems to say, honourable. His venom is reserved for the secondary agents of change, the money-men who exploit - indeed, steal - the natural resources of the subject territories. The monster Kurtz in Heart of Darkness is the company man who goes into the wilderness to mop up all the ivory he can find, not the dying man gone native that Marlow brings back downriver. In Nostromo we have the American financier Holroyd, presented as a figure of ludicrous pomposity during his brief visit to Costaguana. It is Holroyd who bankrolls Charles Gould in asserting his rights to the silver mine - the 'Gould Concession' that killed his uncle and destroyed his father. It is Holroyd's foolish foray south that cements the reputation of Nostromo, the capataz de cargadores, who rescues him from the untamed wilderness.


Nostromo and Charles Gould are seemingly opposites - the former an Italian sailor who has pitched up by chance in Costaguana complete with assumed name, Gould the third-generation European resident, the pillar of society, heir to controversial rights. Actually they are both victims of Holroyd and his cash. With Holroyd's money behind him Gould devotes every last iota of his energy to his mine, neglecting his wife, becoming apathetic to old friends and neighbours. When revolution comes, as it regularly does in Costaguana, his only concern is preventing the soldier-politicians getting hold of his silver. Nostromo, meanwhile, finds that his fame as the preserver of Holroyd - and, indeed, at least one unseated president - has outstripped his status as capataz of the stevedores who operate the seaport of Sulaco for its other offshore exploiters, the Oceanic Steam Navigation Company. Where Charles Gould is aloof and detached, Nostromo cultivates his own myth and becomes peripherally involved with every aspect of Cosraguanan society. When the Montero revolution threatens, it is inevitably Nostromo that Charles Gould enlists to take his silver out to the OSN steamer that will take it north to Holroyd. In that single transaction both men are corrupted beyond redemption.


One last link with The Plague is the doctor. Bernard Rieux is Camus' hero but in Nostromo's Dr Monyngham the only truly honest man and thus cannot be heroic. Monyngham, the ugly outsider, who moons hopelessly over Gould's wife, knows his own worthlessness. Years ago, a young idealist, he was tortured by a previous regime and after they had starved him and crippled him told them everything they wanted to know. Monyngham is ugly and friendless and not even very good at his job - but he knows corruption when he sees it. There is a nighttime scene between the doctor and Nostromo in the commandeered offices of the ONS, with the body of another pathetic torture victim hanging in background, that has to be one of the greatest scenes in all literature.
Conrad goes to phenomenal lengths to bring us the history and topography of his fictional republic. He uses startlingly modern tricks to take us inside his world. The Monterist revolution is daringly not shown because it would detract from the Faustian pact between Gould and the capataz. Instead it recounted as the boring reminiscences given years later to foriegn visitors by the genial OSN agent Mitchell whose claim to fame is that he was the discoverer and first patron of Nostromo.


The only flaw, it has to be said, is Conrad's inability to create convincing women. There are, famously, no women in the main narrative of Heart of Darkness, only the faintly spectral fiancee of Kurtz whom Marlow visits at the end. In Nostomo there are lots of women - Mrs Gould, the first lady of Sulaco; Antonia, the beautiful daughter of the great Costaguanan democrat and historian; the wife and daughters of Georgio Viola, the former follower of Garibaldi. Sadly none of them leap off the page. Their role is to succour and suffer.


Nonetheless, Nostromo remains a masterpiece.
Posted by rogerwood at 15:02