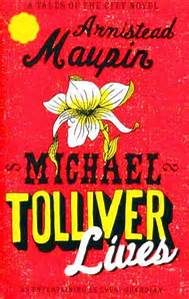 Michael 'Mouse' Tolliver, key character of the Tales of the City series, HIV positive and survivor of Guillain-Barre Syndrome is, to everyone's surprise, not least his own, pushing sixty and very much alive in the first decade of the Third Millennium.


I was a massive fan of Maupin's stories, mopping up the collections as they came out, and was surprised by this late return, especially in novel form. I need not have been. It is a triumph, the product of a master who has reached the pinnacle of his powers. One difference, of course, is that Michael is our narrator, omnipresent and the filter through which we view events. The other is the golden glow of acceptance. The misfits who pitched up at Mrs Madrigal's house in post Haight Ashbury San Francisco bonded by virtue of their outsider status. Thirty-five years later the world has moved on. Gay people and transsexuals are accepted without comment. Michael has married, for goodness sake, and the octogenarian Anna Madrigal now lives in an apartment with three other transsexuals for neighbours, including Jake, who is FTM.


Outside the Frisco enclave, however, things can be a little more awkward. Michael's mother is dying in Florida, which means Michael must visit his brother and sister-in-law who adhere to the militant wing of born again Christianity. Irwin and Lenore could easily be caricatures but Maupin is far too skilled and considerate to fall into that trap. Irwin and Lenore have their problems too - big ones it turns out.


All of life - and death - is here. All the surviving members of the Barbary Lane crowd are covered - Brian and Mary Anne and Mona, who moved to England and became an English country dyke. In its quiet, gentle and above all humane way Michael Tolliver Lives is something of a masterpiece. I'm heading back to the originals and I'm really annoyed that I can't find my copy of Maybe the Moon, which is my favourite Maupin.
Posted by rogerwood at 14:50