Pushkin Vertigo is a new imprint focusing mainly on classic crime fiction (including Vertigo itself) but also including some contemporary work such as this, from 2013 (Pushkin Vertigo Originals). 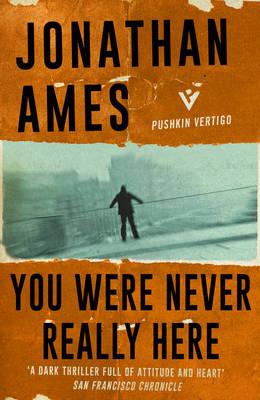 Ames is an American journalist, author and screenwriter, creator of the TV series Bored to Death. "You Were Never Really Here" is actually halfway between a short story and a novella. It took me just over an hour to read. I like that - tell your story without padding, leave it at precisely the length it needs to be. Within the eighty-odd pages of this big-print/small-format paperback he has polished his prose to a stiletto edge. For example:


He had come to believe that he was the recurring element - the deciding element - in all the tragedies experienced by the people he encountered. So if he could minimize his impact and his responsibility, then there was the chance, the slight chance, that there would be no more suffering for others. It was a negative grandiose delusion - narcissism inverted into self-hatred, a kind of autoimmune disorder of his psyche...

Joe, the hero, is off the books - off every imaginable book - ex-FBI, ex-Marine, ex-human being save for his role as carer for his octogenarian mother. He earns his crust by fighting a very specialized niche crime, rescuing young girls kidnapped for sexual purposes. He operates through a whole series of cut-outs. His handler contacts a bodega owner who puts a misspelled notice in his window to notify Joe that he needs to call in.

This case is a big case. The daughter of a state senator has been abducted. The senator has received a text telling him where she is. All Joe has to do is get into the brothel and rescue her. Which he does, with considerable malice aforethought. The brothel, however, is run by powerful people. There are consequences for Joe. His cut-offs are cut out - with extreme animus. Joe uncovers the secret. And resolves to seek revenge.


We don't see the revenge. That is another story. Maybe Ames will tell it, maybe he won't. But we have been given all the pointers we need to imagine what Joe's revenge will be, and that is better than reading about it. That freedom to imagine the very worst is the genius of this little book, why the short format is perfect for the author's purpose. It's the best of its kind that I have read since Point Blank.
Posted by rogerwood at 14:44