The Myth of Meritocracy - James Bloodworth

This is an essay in Biteback's Provocations series, edited by Yasmin Alibhai-Brown. James Bloodworth is a journalist and political blogger. Like Alibhai-Brown, Bloodworth is of the Left, albeit a bit soft-Left for my taste. Nevertheless an unashamedly political publication lacerating the myth of right-wing reform (aka cuts) is to be wholeheartedly welcomed. 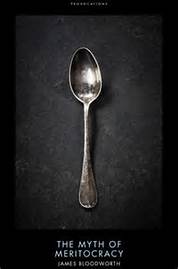 Bloodworth starts with another essay, The Rise of the Meritocracy (1958) by Labour policy maker Michael Young. Like Thomas More's Utopia, Young's work is a satirical fantasy. Unfortunately those for whom he created policy were a lot less intelligent than he was. The blunt end of politics, Right and Left, adopted 'meritocracy' (Young's coinage) as their watchword. Be it Equality of Opportunity or Equal Access to Wealth, social mobility was the mantra. Yet, as Bloodworth demonstrates in blistering detail, social mobility, after sixty years of actual effort, has never been more of a chimera since the days of serfs and vassals.


What has happened to give the illusion of progress is that the traditional working class - factory workers, miners, weavers - has more or less vanished in post-industrial Britain, a decimation far worse than in other so-called developed nations thanks to a full decade of Thatcherite venom. The working population now is employed in services, retail and distribution, and there really is less of a social gulf between worker and line manager. The elephant in the room is that there is an unbridgeable gulf between the employed oiks and their ultimate paymaster. The super rich do what they have always done: they start off radical and end up ultra-conservative. Richard Branson is the perfect example - a rogue shaker of shibboleths in the Seventies, now a tax exile living on his brand and clinging on to every last penny so that his children and grandchildren will never need to sully their hands with work, risk or stress. The term 'robber baron' has a lot more reality than meritocracy.
The traditional posh, meanwhile, also do what they have always done. They suck up to the likes of Branson, flatter them as entrepreneurs, then suck all the rebellion out of them and make them 'one of us'.


The result is that, despite endless reform, far more posh youths go to Oxbridge than kids from comprehensives. Oxbridge graduates disproportionately dominate banking and parliament. That makes them very unlikely to back any meaningful attempt at tax reform or, indeed, genuine social mobility. The second sons and the thick can no longer find their traditional havens of religion and the armed forces, so they become commissioners at the BBC and Channel 4. Unsurprisingly they favour their fellow Old Etonians and Harrovians who, when all's said and done, are the only ones who can afford to study the arts since the abolition of maintenance grants.


You have probably noticed by now. I really enjoyed Bloodworth's argument, both what he says and the way he says it. He has a real gift for the catchy line. Of course, being hopelessly of the lower orders myself, I would do, wouldn't I?
Posted by rogerwood at 14:52