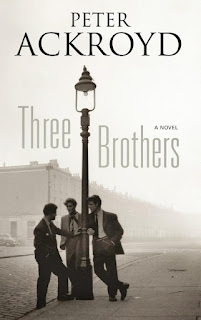 Perhaps put off by his trivial 'brief life' of Wilkie Collins (reviewed elsewhere on this blog) I have been neglecting Ackroyd's fiction, as indeed has he. The last one I read was either Clerkenwell Tales  or The Lambs of London, both written more than ten years ago.  Since then Ackroyd has 're-written' The Canterbury Tales and Mort d'Arthur (don't need either, thanks) but only two original novels, The Fall of Troy (2006) and The Casebook of Victor Frankenstein (2008), which is a shame because he is an extremely good novelist with a fantastic take on literature and the world.  Hawkmoor, of course, is a classic, and I especially loved Dan Leno and the Limehouse Golem.  Who wouldn't want to read the book behind a title like that?

I'm not going to pretend that Three Brothers (2013) is in that league but it is very readable, captivating, with a touch of a magic to it.

The premise itself is not up to much.  Three brothers, born exactly a year apart, and their early adulthood in London of the Sixties and Seventies.  For brothers so ostensibly linked, they live entirely apart in later life albeit they are linked by the mystery of their mother, who walked out on them when they were pre-teens.  Harry Hanway becomes a Fleet Street editor, Daniel a Cambridge lecturer, and Sam a lost soul, wandering through life.

It is Sam who happens upon his mother and her secret.  That secret in turn links the brothers - unknowingly, because they are not in contact - with other characters, the slum landlord Suppta, the monstrous newspaper proprietor Flaxman, the corrupt politician Askisson, and the pied piper charmer Sparkler.  It is London and its linkages that underpins the story - small worlds within the vastness of the megapolis.

And the magic... The brothers occasionally experience the emotions of their siblings.  Sam finds and then loses a nunnery, which disappears overnight, only to resurface at the very end.  The boys' insubstanstial, inconsequential but dutiful father, whose funeral brings them together for a day, looks back at them as his coffin disappears behind the curtain at the crematorium.  And Harry sees an apparition rise from the body of his sleeping wife.  These instances are left unexplained and therefore fascinate.  They are the making of the book, they justify the other, mundane and worldly coincidences.  They have reawakened my interest in Ackroyd.  I am re-enthused.
Posted by rogerwood at 12:15