Trieste and the Meaning of Nowhere - Jan Morris

This, it makes very clear from the outset, is Jan Morris's last book.  Though she is still very much alive at the time of writing, Morris decided to call it a day in 2001, perhaps because she is at heart a travel writer and she was in her mid-seventies in 2001.  She chose to make her exit with a reflection on Trieste because it is both bizarre and at the same time mundane - an outpost of Northern Italy, hugely redeveloped in the Nineteenth Century as the seaport of the entire Austro-Hungarian Empire, but really part of Slovenia.  She also spent time there immediately after World War II and suggests that her first true travel writing was done here. 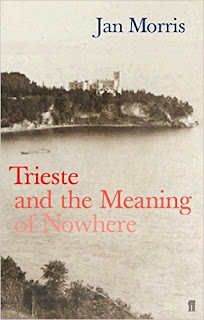 I say 'suggests' because that is the magic of Jan Morris.  She can describe a house, a restaurant, a public piazza in a few crisp sentences, but what really matters are the sensations and memories it evokes.  The city enclave comes across as a fading beauty, not really Italian and certainly not Slovenian.  Naturally James Joyce is a presence but I had not realised that Italo Svevo was a Triestine or that Rilke wrote his masterpiece in the area.

I am new to Morris (but will be back).  I knew her story, however - one of the great personal journeys of British culture in the second half of the Twentieth Century - and wonder if she relies too much here on the reader knowing her background.  Does a new reader who doesn't remember her in her heyday understand how the wartime soldier writing his essay down by the harbour in Trieste became the woman who returns in the millennium?
Posted by rogerwood at 17:13