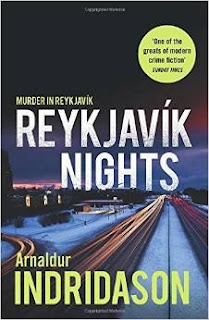 Arnuldur Indridason is an outsider in the Nordic Noir boom, largely because Iceland is so alien, even compared to Norway and Sweden.  The use of first names because of the patronymic problem, the so-called delicacies of blubber, sheep's head and - in this story - the "appetising aroma of dung-smoked meat"; it all takes a bit of getting used to. Here the problems are magnified because this is a "young" detective story, a flashback to an unspecified time (I suspect the early seventies) when Indridason's main character Erlendur was a rookie traffic cop and his usual oppo Sigurdur Oli doesn't feature at all.

Hannibal, a tramp Erlundur is vaguely acquainted with, is found drowned in a puddle on a building site.  It's a very shallow puddle and Erlundur isn't satisfied that even an hopeless drunk can drown in it.  In his spare time, which he has a useful amount of because he's working the light nights of the Arctic summer, he looks into Hannibal's life and wonders if his death is in any way linked to the disappearance of a young woman in the same area at about the same time.

The plotting, as always with Indridason, is the key element.  He kept me guessing wrong right to the denouement.  I first discovered him with perhaps his best-known novel Jar City, which is also an excellent Icelandic film.  Hypothermia is the one, if I remember right, which reveals the big secret of Erlundur's youth which is only hinted at here.  Now Jo Nesbo has become repetitive, his fans should probably consider some of his less heavily-promoted and frankly less-successful peers.  Indridason is one of the best of them.
Posted by rogerwood at 16:10