On the face of it, there's nothing that should appeal to me here. An Irish Tiger family divided and reunited? Blah, ug, kak! But magnificent writing, characterisation, compassion and insight can elevate the most hackneyed story into something fresh and new and inspiring. And Anne Enright has all of these in spades. 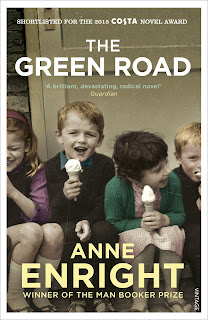 Again, on the face of it, there is nothing new or fresh about the characters - the demanding self-serving matriarch, the obligatory gay failed priest, the wanderer of the world, the second generation mammy tied in a perpetual tug-of-love with her own mother, and (ah-god-jaysus-no) the wannabe actress.  Enright enrichs the stereotypes by giving them their own sections of the book, each in its own specific time which cleverly helps to progress the over-arching narrative.  Some of these work better than others and I expect that different readers will prefer different siblings.  Personally, as a sated dramaturg, I would walk many a mile to avoid a petulant thirty-something actress in her cups.

Rosaleen, the widowed mother of this brood, is the last to have her story, and herein lies Enright's masterstroke.  We realise she too is a child, just an ageing one.  She demands attention just like Hanna, and Dan, and Emmet and Constance.  The difference is, she has hit upon a device for achieving her demands.  She announces, out of the blue, her intention of selling the family home.  That brings the children scurrying back to the Emerald Isle for Christmas.  They squabble and bicker and Enright lets us form the conclusion before she spells it out - they are all failures, all immature drifters.  Rosaleen leaves them to it, and wanders off to the Green Road itself, an emblem of Ireland's dewy past, an emblem of shared youth and hope.

The Green Road is something a masterpiece which easily transcends its somewhat hackneyed genre.  Enright is not the one who made it hackneyed and should not be blamed, or overlooked, for the sins of others.  After all, every one of us has a family, a childhood we can never truly escape, and an innate concept of something called home.
Posted by rogerwood at 16:06