Pamuk won the Nobel Prize in 2006, so we can take it for granted that he writes like a dream.  Silent House was his second novel, published in 1983 but only translated into English in 2012, which seems frankly bizarre. The book is written in the first person but the twist is, each chapter is in a different voice to the one before as the main characters give their perspective on the events of one long weekend in a holiday town in easy reach of Istanbul. 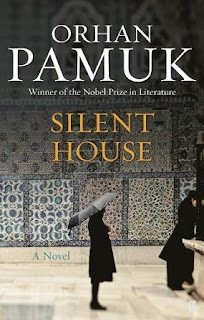 The main characters are the ninety year old Fatma, long widowed, who lives in the titular house with only the dwarf Recep to attend her.  Recep also happens to be the illegitimate son of Fatma's late husband, conceived - as was his younger brother Ismael - in the housekeeper's hut in the grounds of the mansion. Fatma's son Dogan died - a drunkard and non-achiever like his father - a decade and a half ago.  His wife, Gul, predeceased him.  Their children have come to visit their grandmother as they reluctantly do every summer: Faruk, a third generation drunken failure, the glamorous sister Nilgun, who inclines to the politics of the Left, and younger brother Metin, who plans on making an 80s-style fortune in America but who first hopes to seduce the local beauty Ceylan.

Nilgun and Ismael are not given first-person narratives.  Instead of Ismael, who lives away from the Silent House and only visits right at the end of the book, we hear from his son Hassan, who is between Nilgun and Metin in age and who was allowed to play with them at the mansion as a child.  Like Metin he dreams of great achievements, but whereas Metin is a star student in the big city Hassan is a drop-out in an unimportant little seaside town.  In 1980, as today, Turkey was torn between the rightwing Nationalists and the Leftist intelligentsia who saw Turkey was either the last bastion of Western Europe or the western frontier of the Soviet bloc.  Hassan hangs out with the local Nationalists, who spray slogans on walls and not much else.  Whilst Metin hankers after the lovely Ceylan, Hassan is besotted with Nilgun.  Unfortunately for him, she gives the impression of not knowing who he is.  This leads to the unforeseen climax of the story and is the reason why Nilgun has no chapters of her own but is only seen and appraised by others.

The young folk are immersed in their own problems.  Recep, in many ways the most appealing character, struggles to find positives in his situation, pandering to every whim of the embittered old woman who lamed his brother and may well have stunted Receps growth.  And marooned in her bedroom Fatma goes over and over her long life - a life she has no intention of giving up any time soon.  She came to hate her husband, despised her son and is largely indifferent to her grandchildren.  Her relationship with Recep, the living proof of her late husband's depravity, is the fulcrum on which the novel depends.  She cannot survive without him yet she cannot forgive him his paternity and cannot resist tormenting him.

Silent House is a brilliant book by a master of modern fiction.  Essential reading.
Posted by rogerwood at 19:10