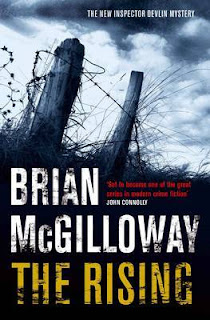 I started The Rising with high hopes.  Post-Troubles Ireland is a fascinating setting for crime fiction and McGilloway seemed to have taken the trouble to polish his prose in order to bring some quality to a genre that is always at risk of slipping into cliche.  Sadly he apparently only took the trouble in the early chapters and, frankly, the unique setting quickly became irrelevant.  By the middle of the book I was losing track of which side of the border Devlin was on at any given time; there seemed to be no difference, though I'm pretty sure British citizens living in Ulster might not always be so forthcoming to Garda officers like Devlin.

The Rising itself is an extreme community group cracking down on drug dealers.  Again, early on, they seem to be verging on paramilitary tactics, but it soon wears off and they're not really the drivers of the story.  The story is about drug dealers, and it's good that McGilloway ups the ante by involving the son of Devlin's former colleague and lover, but the key twist was ludicrously obvious and when I saw that coming the tension failed.

The Rising is the fourth and latest in the Devlin series.  The problem generally with police series is that the protagonist tends to develop a barrowload of personal problems, most of which have now become cliched.  Devlin doesn't have those problems.  Unfortunately that makes him boring and characterless.  The particular issue that McGilloway has handicapped himself with is that he chosen to write in the first person.  We therefore see this world solely through Devlin's eyes.  We therefore know that he is going to see out the story, so that's the effective tension gone.  Secondly, Devlin is a bit bland, largely conservative-with-a-small-c in his outlook, and thus an uncontroversial-bordering-on-uninteresting guide to his world.  The one whose inner voice we really want to hear in this story is Caroline Williams, mother of the dead boy and ex-wife of the appalling Simon - there's the character who would have given this storyline zing.

Maybe I would be happier with the author's other series, the DC Lucy Black thrillers...