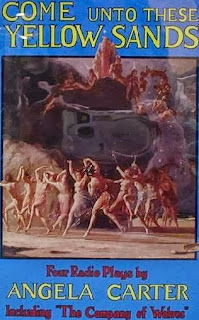 Angela Carter was a true enthusiast of radio drama which she found ideally suited to her gothic sensibilities.  For Carter, radio was the natural home of her fantastical creations.  So what we have here are the radio versions of Company of Wolves, Vampirella and Puss in Boots, plus the title play, a magnificent dramatic feature on the Victorian artist, madman and murderer, Richard Dadd.  I suspect I saw the same exhibition of Dadd's work from the madhouse that Carter did, sometime around 1973.  I too fell under the spell of The Fairy-Feller's Masterstroke.  We all did.

What Carter achieves here is a seamless meld of fact and disordered fantasy.  Doctors and Dadd's former friends discuss his condition whilst characters from his paintings - Oberon, Titania and the Fairy-Feller himself - discuss their own reality.  Magnificent.  Very few radio plays nowadays attempt anything remotely so ambitious, and the situation is likely to get worse as we goes weeks on end without Drama on 3 and the plays on 4 become every more like bad TV.  So transport yourself back to the late Seventies and early Eighties when Carter was working in radio and remember that they did these things differently back then.

For a longer, more scholarly review click here.
Posted by rogerwood at 17:01