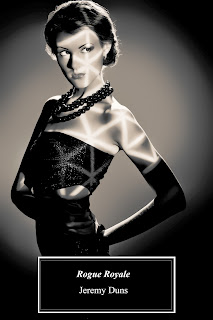 Jeremy Duns is a British author of Cold War spy fiction (featuring Nick Dark) who now lives in Finland.  He is the man who found out R J Ellroy was writing his own ecstatic reviews on Amazon, which recommends him strongly to me.

This is an ebook which expands on journalism he wrote following his discovery of an never-filmed script for Casino Royale, penned by the legendary Ben Hecht (The Front Page etc.).  At something over 10,000 words it is the perfect length and subject for a non-fiction ebook.  Now I can't stand Bond in either film or print, especially print, but Duns is a fan and is able to place Hecht's work in the developing Bond canon during the early Sixties.  He is not too dazzled by Hecht's reputation to spare him due criticism for dumb ideas like the mindreader who helps Le Chiffre cheat at cards.

It's an impressive piece of research and eminently readable.  I recommend it.
Posted by rogerwood at 15:45