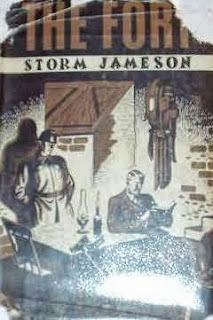 I've got to be honest: my copy doesn't have a cover and I've borrowed the above image from the ever-reliable Fantastic Fiction.  Also, I only bought it because the title cropped up during some academic research I'm doing on another forgotten bestseller of the Thirties and Forties, Eric Linklater.

One reviewer described it at the time as a hybrid of a play and a short story.  No it's not, it's a novella and I'm sure the word was current in 1941.  Jameson wrote it in the couple of months immediately after the fall of France in June 1940.  It is set, specifically, on June 13.  A wounded English officer has taken refuge in the cellar of a French farmhouse.  Also hiding there is a French officer and two of his junior officers.  During the night another English soldier arrives and a German is captured.

What the story is really about is Jameson's utter contempt for the defeatist element of the French nation.  She does not make the mistake of over-egging the heroism of the English nor portraying the young German as just a mindless fanatic.  She is convinced both of the justice of the war (despite having been co-founder of the Peace Pledge Union in the late Thirties) and the damage it will surely do to the world.

The ending is a surprise which would have been much more powerful at the time.  As it happens, it is exactly the effect my subject Linklater pulls off at the end of his first radio 'conversation', The Cornerstones.  The Fort was also adapted for radio in 1942.  You have to try and imagine the effect the ending had on British listeners enduring the Blitz.
Posted by rogerwood at 15:58