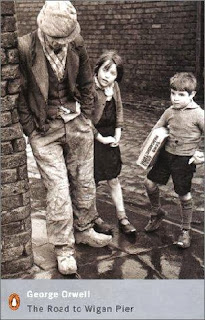 Supposed classic - massive disappointment.  The first half seems acceptable - things that Orwell witnessed personally, statistics he collected - but then you realise: he's looking at the lower working class like a lab assistant watching bacteria through a microscope.  He has no emotional engagement whatsoever.  Worse, he fails to recognise or probe the emotional engagement they have with one another.  Orwell describes the squalor in which they live and sleep but never seems to register that the working people, and even the unemployed, bear the squalor by being out of the house as much as possible.  I knew these people - not at the time, of course, but in their 50s and 60s.  They were my family.  They came from the slums of Sheffield, which Orwell regards as a face unfit for human habitation.  My great-uncle who, to me as a child, was the greatest man alive, lived in a back-to-back with communal toilet block in the yard and a pigeon loft above the lavvy.  These people lived out of the home.  The women chatted on their doorsteps.  They went to the cinema, to social clubs (never pubs for my relatives, many of whom worked for breweries).  Other families lived their lives around church and chapel.  Spiritualism was popular, as was night school.  Many were actively involved in politics, others trades unionists and communists.  All of this passed Orwell by.

The second half was recognised at the time as awful - the publisher, Victor Gollancz, felt obliged to publish an apology for it in the first edition (omitted in this Penguin edition).  The second half is the story of Orwell's journey from middle class public schoolboy, via Burma, to ineffective, vaguely socialist, social critic.  I read it with mounting disgust.  But I did read it, all the way to the end, so it must have some literary quality.  I was planning on getting Homage to Catalonia, or Down and Out in London and Paris, but I think I'd rather try Jack London instead.

The good news - it hasn't put me off Orwell's fiction.

Email ThisBlogThis!Share to TwitterShare to FacebookShare to Pinterest
Labels: Down and Out in London and Paris, George Orwell, Homage to Catalonia, Jack London, non-fiction, Road to Wigan Pier