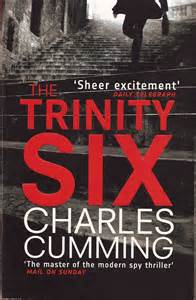 Trinity Six is closer to home than most of Cumming's work, Britain-based, albeit his protagonist, UCL lecturer Sam Gaddis, gets about during the course of his fictional journey. He kind of inherits a project about the much-mooted sixth man of the Thirties communist cell at Trinity College Cambridge. He meets the man in the know (or is he?) and begins his research - only to see a key witness gunned down in front of him, only for Gaddis himself to gun down the assailant.

It seems the British SIS is not the only organisation of its ilk with an interest in suppressing the Sixth Man story. The revelation of why is splendid when it comes. The working out of the plot - a fine example of the biter bitten - is masterly. What is wrong with British TV? Why is nobody snapping up Cumming's work for must-see broadcasting?
Posted by rogerwood at 12:59