The Temple of Dawn - Yukio Mishima

The Temple of Dawn is the third part of The Sea of Fertility tetralogy. I would clearly of benefited from reading the preceding two first. All the same, I found The Temple of Dawn fascinating in itself as a chronicle of man in later middle age coming to terms with mortality by means of an extraordinary exploration of reincarnation as envisaged in various forms of Buddhism. 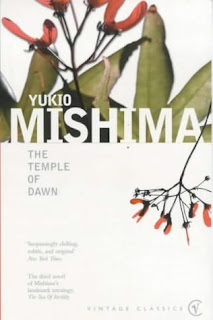 Honda is a distinguished lawyer and former judge. In 1939 he is sent to Bangkok to resolve a commercial dispute. Whilst there he is introduced to Princess Moonshine, a peripheral member of the royal family and a greatly cosseted infant. The strange thing is that she seems to understand Honda, who speaks only Japanese, and seems to suggest that she is a reincarnation of Matsugae, Honda's schoolfriend (this is essentially the plot of the novel sequence - Honda trying to save successive reincarnations of his friend).

Having won the lawsuit, Honda is rewarded with an expenses-paid tour of India, where he investigates the reincarnation belief. This is done in extraordinary detail and again, I suspect that this is the culmination of previous theorising in earlier books; in this book, considered alone, it goes on too long. Certainly a disproportionately tiny amount of space is given here to World War 2, which can't be right.

After the war, fifteen years after their first meeting, Honda meets the princess again. Now known as Ying Chan, she is studying in Japan. Honda's mission now is to find out if she has Matsugae's telltale triangle of moles on her side, beneath her arm. He goes to ludicrous, even perverse lengths - a man pursuing his obsession.

There is masterly writing here. We encounter Mishima at the height of his powers - and he was a great writer to begin with. I shall certainly track down the other three volumes of The Sea of Fertility, but perhaps something a little less demanding first.
Posted by rogerwood at 17:12