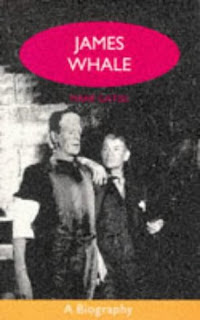 This biography of the Hollywood director behind Show Boat and Frankenstein was written in 1995, about the time Gatiss started with The League of  Gentlemen. Whale is fascinating. He seemed to be the archetypal English gent but in fact he rose from considerable poverty in the industrial West Midlands. He was almost 40 when he took to directing at all, and hit the jackpot first time when his production of R C Sheriff's Journey's End went from pro-am to the West End, then Broadway, then for most of those involved, Hollywood.

Whale enjoyed a decade of spectacular screen successes before abruptly falling from sight. By the time America entered World War II he was more or less unwillingly retired. He took to painting and then drowned himself in his pool aged 68.

Whale's problem, of course, was that he was homosexual, not overtly but certainly not covertly. Everyone knew but not everybody had a problem. But when Whale became a problem in other areas of activity, too demanding on set, not sufficiently deferential to the new studio owners, his homosexuality was used as an excuse to get rid of him. They stopped him working but in many ways Whale had the last laugh. He always seemed to know his time in the spotlight was limited. He looked after his money when he was as highly paid as any director in town. After almost twenty years living off his savings in considerable style, he still managed to leave an estate worth over half a million dollars.

Gatiss, we all know, is a gifted writer who does his research, The book is sheer joy to read, from start to finish.
Posted by rogerwood at 12:55