The Man Who Was George Smiley - Michael Jago

The title says it all. John le Carre admits basing his most famous character on John Bingham, his mentor during his brief time at MI5. Le Carre had to quit when his books became famous, Bingham didn't because the books he had been writing for over a decade had not been so successful. He was a noted author, nevertheless, and lots of people looked forward to the new Bingham novel in the Fifties. Unlike le Carre, Bingham didn't hide behind a pseudonym. Indeed, in his heyday, most people knew he was also Baron Clanmorris in the Irish peerage. 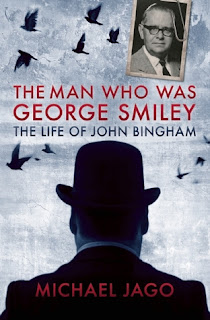 Bingham's ancestors are one of the fascinating elements of the book, especially his useless father Maurice and snobbish mother Leila, who spent much of their married life in seaside boarding houses. Bingham's own children were more successful - his daughter Charlotte was one of the scandalous young female authors of the Swinging Sixties, a big bestseller whilst still in her teens.

Bingham was something of an accidental intelligence officer. He was a newspaper columnist when war broke out and Maxwell Knight took him on. He quickly became Knight's deputy in the war against rightwing Nazi sympathisers in the UK. Knight left the service soon after the war but Bingham kept coming back, serving through the Cold War, the Blunt affair and the Troubles in Northern Ireland. He kept on writing but could not replicate his initial success or get anywhere near le Carre's fame. In truth, he will go down in history as the model for Smiley.

This is an unusual tack for a biographer to take and I must say Michael Jago pulls it off remarkably well. He is particularly good on the umbrage taken by Mrs Bingham/Lady Clanmorris, herself a published writer and performed playwright, who felt it was unfair that her husband's character should be hijacked with no recompense. 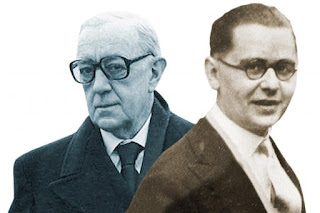 An excellent book, thoroughly researched and full of insights into the 'Circus' of the Sixties and Seventies.
Posted by rogerwood at 15:00