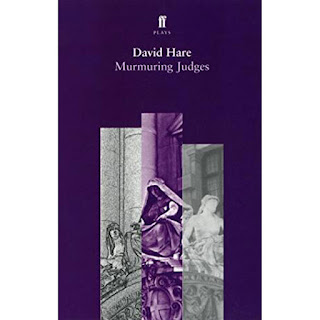 The second in David Hare's state of the nation trilogy, Murmuring Judges is, as the title suggests, an examination of the state of the legal system and what, in legal terms, counts as a win. The play was first staged in 1991 and it's disappointing how little has changed. Indeed - the question is unavoidable - can it change? In a combative system there can only be winners and losers, and one of the upsides of criminal law is that there are no grey areas. Having just written that last clause, I'm asking myself if it needs qualification. There should be no grey areas - you are either guilty or you are not. The intractable problem of the legal profession where everyone from beat constable to Lord Chief Justice keeps a scorecard is that grey areas are too often made out to be black or white.

Gerard gets five years, which seems a bit unfair. He was only a peripheral player in the crime and has no previous. But still his barrister, Sir Peter, can live with it. It was, after all, only a Legal Aid case. Not the sort of thing he would usually tackle. So Gerard is a new prisoner and Sir Peter has a new pupil, Irina. She's very bright, of course; she's also black and beautiful. She looks good on Sir Peter's arm for an evening at the opera. Trouble is, she's interested in Gerard's case. She recognises the unfairness of the sentence and is concerned about something the main police witness said.

The witness is Barry, who has a reputation for closing cases. His girlfriend Sandra is also concerned about Gerard's sentence. She was present on the arrests and noticed something odd in the way Barry treated the senior, more hardcore criminals.

The scale is panoramic - something that could only really be staged by a massive, publicly-funded theatre company. There are lots of characters and lots of subplots. You can almost see Hare plotting his thesis on a huge whiteboard. And it's very, very good. In the end Gerard wins his appeal and gets six months reduction in sentence. So everyone's a winner - except Lady Justice. 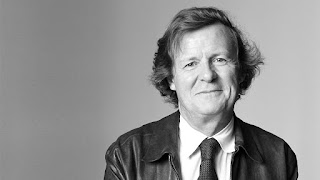 I had forgotten how good David Hare can be. I followed him when we were both young and still have most of his plays from those years. He went upmarket in the Eighties whereas I became much more political, and I ceased to pay attention. I have, however, seen his more recent TV films and found much to be enjoyed. Clearly I have catching up to do.