After the Silence - Jake Woodhouse 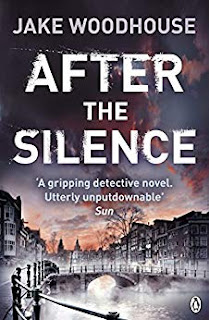 You wonder, how does a new writer get a four-book deal with Penguin? Then you read his personal profile. Then you realise what After the Silence actually means (the 1996 US movie, the charity that supports victims), And you realise, Woodhouse has confected a premise well nigh guaranteed to snag the attention of interns chasing hashtags at the publishers. He's an entrepreneur. He does wine. He has written a Euro thriller about child sexual abuse.

Of course, he would have got no further if he couldn't write or his book was boring. His writing is functional, which will do. His plot is well above average, bordering on very good indeed. But After the Silence is a moneymaker. Woodhouse even writes it in short filmic scenes to save the scriptwriter having to do it. There is no art here, nothing unexpected. The characters are given dense backstories but remain as dull as dishwater, and there are far too many protagonists.

Ostensibly Jaap Rykel of the Amsterdam police is our hero. His partner gets killed so obviously he wants to solve that but is not allowed to. Obviously he does it anyway. It doesn't take much solving, unfortunately; it is obvious who done it from the villain's first appearance. Jaap mainly has to solve the separate mystery of the dead man hanging naked from his apartment. His enquiries catch the attention of a young woman detective from the sticks who is investigating an arson murder of her own. And Jaap needs a new partner and has to make do with the one nobody else wants, whose various errors lead to more deaths.

It's all perfectly pleasant. I never wanted to stop reading but nor was I ever excited or intrigued. After the Silence is one of four, The Amsterdam Quartet, all of which are out now. I'm afraid I have got as far as I shall be going.
Posted by rogerwood at 17:05