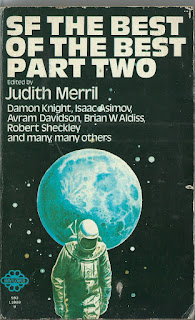 Had to pick this up if only for the cover and the convoluted title. These mid-Sixties anthologies are notable for the oddments you find and how elastic they are willing to make the Sci Fi genre. The best story here, 'The Wonder Horse' by George Byram, has nothing whatever to do with either Sci Fi or fantasy. The premise is entirely about natural genes and it can hardly be a fantasy because every now and then a wonder horse does come along. I'm thinking Galileo and, currently, Enable. Byram captures the race fan's reaction perfectly. Indeed it is his immersion in the detail of the racing business that makes his story so good.

Similarly there's a Shirley Jackson oddment, "One Ordinary Day, With Peanuts", that just about scrapes in as fantasy, though I would be more inclined to call it a twisted tale. There's an early-to-middle period Brian Aldiss, "Let's Be Frank", which is simply a caprice, and there's the widely anthologised but nevertheless pure Sci Fi, J G Ballard's "The Sound Sweep", which I have discussed here before.

My favourites were "Nobody Bothers Gus" by Algis Budrys and "Day at the Beach" by Carol Emshwiller. Both well written, both leave as much to the imagination as they make explicit.
Posted by rogerwood at 11:27