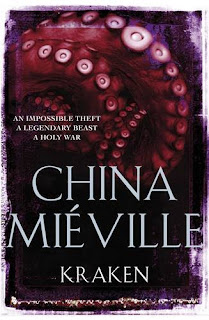 Mieville is probably the high priest of British New Weird. Kraken (2010) is not especially new but it is certainly weird. A preserved giant squid vanishes from the Natural History Museum. Its conservator, Billy Harrow, finds himself drawn into a web of cult police and kraken cults. Beneath this lies a secondary world of Londonmancers and occult gangs. On one, and one thing only, the feuding factions agree: the taking of the kraken betokens the Apocalypse.

I was instantly reminded of Neil Gaiman's Neverwhere, still my favourite of his. From Neverwhere springs a subset of alt-London Weird, that includes the likes of Ben Aaronovitch (Rivers of London). Mieville takes things much further but I feel he tries to cram too much into one novel. Kraken is far too long. The opening - the revelation of the mystery world - is extremely good; the apocalyptic battle at the end is masterly done; but there is a hell of a lot of middle, much of it stodge, much of it dispensable. That seems to the pitfall lurking for all such fictional constructs. Where do you draw the line? It's not for me to suggest plotlines to the likes of Mieville, however there is another spellbinding yarn waiting for the Tattoo and his unwilling host Paul.

The male characters are better drawn than the female. Mieville clearly has high hopes for his wisecracking witch-cop Collingwood. The best I can say is that she is amusing in small doses.

I seem to be listing a lot of negatives. That's not the intention. I really enjoyed Kraken and only criticise because I care. There's a lot more Mieville and New Weird waiting for me. I'll keep you posted.
Posted by rogerwood at 14:41