How the Hell Did This Happen? - P J O'Rourke

It is as if P J O'Rourke had been waiting all his life for Donald Trump to waddle along. Sure, he cut his pointy teeth on Richard "Tricky Dicky" Nixon, and kept his satirical eye in with the line of presidential duds that followed Reagan (it really is bad news when you realise George H W Bush was the last truly competent president). But Trump is the prize for O'Rourke, the fact that he was up against the hopelessly flawed and eminently corruptible Hillary Clinton an unlooked-for bonus. Yes, they can set up inquiries into Russian hacking but they can't get round the fact that the leaks were genuine and true. 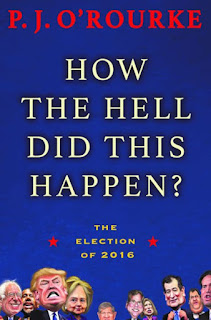 So, the moment he had stopped rubbing his hands in glee, O'Rourke sat down and started a journal. However the election panned out, he knew he had a bestseller in the pipeline. He starts by disposing of the small fry, the Ted Cruzes and Jeb Bushes of this world who nevertheless turned out to be the best of a very shabby stream of also-rans who came and went over the course of the primaries.
O'Rourke knows this election was not about either Trump or Clinton. He knows it is really about the abused electorate getting their own back on the elite who bailed out the banks and hawked American jobs off to the most disreputable overseas charlatan they could find. The men in shiny suits who have spent more on their teeth than the average voter earns in a year. Men like, well, Messers Cruz and Bush 3. He explains at length how it is really about delivering one below the belt to the self-appointed elite.


The ultimate triumph of Trump is not thanks to him or her. It is down to the failure of America's ludicrous electoral system. If these two are the best the Democrats and Republicans can come up with then the system is rotten to the core. O'Rourke has always espoused this thesis. Now he has the proof positive, glowing uranium orange behind the big desk in the Oval Office.


So read his book. Laugh. Laugh out loud because it is very very funny. Then weep.
Posted by rogerwood at 14:40

Email ThisBlogThis!Share to TwitterShare to FacebookShare to Pinterest
Labels: 2016, Donald Trump, Hillary Clinton, how the hell did this happen, p j o'rourke, satire, US election