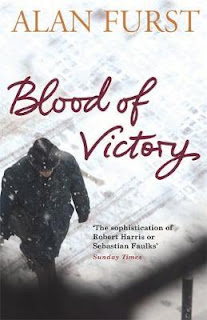 The more Furst I read, the more I'm impressed. The cover blurb from the Sunday Times likens him to Robert Harris and Sebastian Faulks. I like Harris, I have so far steered clear of Faulks, but for me the closest comparison is with John le Carre. High praise, I know, but they both immerse us in their world of espionage; they write obliquely, almost furtively; and they both have an aura of insider knowledge. Le Carre's relatively brief involvement with the SIS is well known and covered in various reviews on this blog (if anyone is wondering, I'm still trying to force myself to finish reading The Perfect Spy). Furst identifies himself as a journalist; presumably he has cultivated links and sources in the spy world. What he can't have, of course, is any first hand knowledge of clandestine activities in the Balkans during the first half of World War II. Yet that is his world in all the novels of his that I have read. How would you even start to research such a topic?

There is no apparent overlap between the novels (again, subject to the proviso that I haven't read them all) and Furst makes things even more difficult for himself by having non-English or non-American protagonists - in this case I A Serebin, onetime Soviet hero, writer of delicate fictions set in Odessa, and now a leading figure of the International Russian Union (that is to say, non-Soviet emigres) in Paris. Serebin finds himself seduced (literally) into a multinational plot to disrupt German oil supplies from Romania. The scheme is incredibly complex and I lost track completely. It didn't matter a jot - for me, the convolutions are the point. What mattered to me was Serebin, a splendidly-drawn character, sentimental in his care for a former lover, now dying, and utterly indifferent to the dangers he faces. Unlike so many lesser writers in the genre Furst does not lose focus on his hero. Serebin is there on page one and he is front and centre in the action sequence at the end. I was more than captivated by his current lover Marie-Galante, a femme anyone would risk fatality for.

For me then, Alan Furst is in the top two or three exponents of spy fiction. The big excitement is that he is still getting better with each new novel.
Posted by rogerwood at 14:29