The Enemy in the Blanket - Anthony Burgess 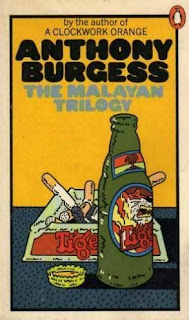 Part two of The Malayan Trilogy sees Victor Crabbe and his long-suffering wife Fenella dispatched to one of the furthest outposts of the tottering colony. Crabbe is technically head of the local school but, typically, soon finds himself carousing with a new mistress and an old college friend. This friend, Rupert Hardman, fills the place of Nabby Adams in The Enemy in the Blanket. Like Nabby, Hardman likes Malaya and desperately wants to make a career there. Where Nabby was notable for his size, with Hardman it is his colouring - he is whiter than white, even whiter in the damaged tissue where his face was burnt during his wartime service with the RAF. He is a lawyer and not an especially bad one, but he just cannot find a way of breaking through into success. Again, like Adams, he has debts everywhere, though not for booze; in Hardman's case it is the necessities of life that throw him into debt - food, accommodation, a halfway decent suit for court. Hardman is so determined to be a success that he makes the ultimate sacrifice and converts to Islam and marries Normah, a rich and voluptuous widow. Like Burgess, Hardman is a Catholic, so his mercenary switch of faith costs him the only real friend he had in Dahaga, the saintly priest Laforgue. Meanwhile Normah turns out to be a demanding wife. She has needs. She drops sinister hints about what happened to her previous spouses when they failed to meet those needs.

Crabbe, of course, floats happily down the stream of failure. He has the chance to slake his sexual needs with the feisty Anne Talbot. He tolerates the machinations of his Machiavellian deputy head Jaganathan. He tolerates the idea that Fenella is compensating for his shortcomings by having an affair with the Abang, the real ruler of Dahaga.

The plot resolves beautifully, with real moments of tenderness between Crabbe and his disappointed women. Hardman makes a desperate bolt for freedom. Jaganathan gets his comeuppance and life rolls on in Malaya like a runaway bulldozer - all to the benign amusement of a chorus of lackadaisical Sihks. Burgess's second novel is a significant step forward in his literary development. It is comic, clever, a splendid depiction of the last sputterings of Empire.
Posted by rogerwood at 14:51