Gerbrand Bakker is a Dutch gardener. You need to know more? OK, he's a sometime skating instructor. He is in his fifties. He was forty when he wrote his first book, The Twin. Oh - and he's an absolutely phenomenal writer. Thanks, Gerbrand, for this info. 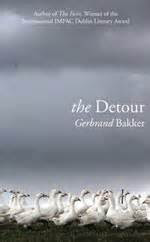 The Detour is his second novel. It is set in Wales. A Dutch woman in early middle age, whose name might or might not be Emelie, has run away from her academic job and her waste of space husband after a possible fling with what might have been one of her students. But that's not the only reason...

Anyway, she pitches up in rural Wales, the detour in question, and rents a cottage which a local farmer is looking after while the estate of the previous owner, recently deceased, is settled.

The stranger keeps herself to herself. She tells the locals, when she can't avoid them, as little as possible. Still, the locals know as much as we do until the action switches back to Holland where the husband is managing just fine without her, although her parents are starting to worry. They persuade the husband to report her missing. He eventually pals up with a copper who has nothing better to do than pursue the one lead they have - that 'Emilie' might be in Wales.

Meanwhile a free-spirited young lad called Bradwen has turned up with his dog Sam. The woman takes them in. Inevitably, sooner or later, they drift into a relationship which Bakker develops into a wonderful mish-mash of mutual support and interdependence but absolutely no revelation. Revelation comes gradually, by accident, and - the touch of a master - never completely. We learn some scraps of what might be the truth but are left wondering long after finishing the book.

It's a slim volume - only 230 large print pages - but it makes for a slow, luxuriant read. Bakker evokes the landscape of Snowdonia whilst getting immersive with the woman's plans for the garden. The characters might be unreliable witnesses yet they are wonders of layered complexity. Emilie tries, periodically, to think about her academic work on the poetry of the reclusive American nature-poet Emily Dickinson; she never latches onto the parallels with her own life but Bakker brilliantly makes sure that we always do. The translation by David Colmer is a work of art in itself.

Watch out for Gerbrand Bakker. He may well turn out to be something very special.
Posted by rogerwood at 15:15