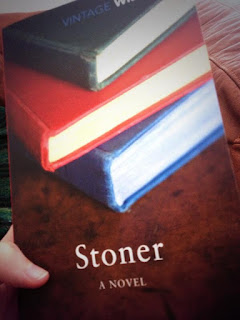 Stoner is the Great American Novel that had to bide its time. Published in 1965, it had to wait more or less fifty years for its classic status to be recognised.


It explores familiar territory - the campus, secluded scholarship, the lost grandeur of the South - and it takes the two World Wars as its chronological frame.


William Stoner exceeds expectations when he gains admittance as a student to the University of Missouri in 1910. He comes from dirt-poor farming stock and initially studies agriculture. Then his eyes are opened to the wonders of English Literature - in his case the late Latin lyricists. Thereafter, he never leaves the university and never really revisits his youth, save to bury his parents and sell the farm. The University is his life, teaching his passion.


Classmates leave to serve in France in 1917. Stoner thinks long and hard and decides to stay. Twenty-four years later, of course, he is too old to serve, a married man with a daughter. And here we really comes to the central issue of the novel. Stoner is a good man, but he is not a good husband and lets himself get sidelined as a father. His life is study but he is a poor student of life. Williams' great gift is the creation of character. Stoner's wife Edith is a fragile Southern beauty and slightly deranged. Stoner loves her and she wants to love him, but they can't manage it, so they eke out an uneasy compromise and over the years they make it work. The daughter, Grace, on whom Stoner dotes, finds teenage pregnancy her only way out. The father of her child, a student at the University, does the right thing by Grace only to be killed in the war. Thereafter Grace takes to drink.


Stoner's great love turns out to be another student, Katherine Driscoll, a free spirit and thoroughly grounded young woman. The only way to keep her is for him to leave Edith and leave the University. As a good man and a dedicated teacher, Stoner can do neither. He becomes embroiled in a feud with his head of department that lasts to the end of his career. And, ultimately, Stoner does what the protagonist in every Great American Novel has to do: he makes his peace and dies. And what a death! Gradually fading away with his long-forgotten text book in his hand. Magnificent. Profoundly moving.


How much of this is autobiographical we do not know. We know that Williams, too, was an academic and, like Stoner, he wrote far too little. Other than that, he is a mystery. His name is about as plain as it gets, and so is his prose style. But what his achieves with simple words is far more than the likes of Henry James achieved with all his frills and flamboyant vocabulary. Williams achieves deep truths and phenomenal beauty.


I'm having luck, recently, finding masterpieces. Stoner is definitely another.
Posted by rogerwood at 15:28