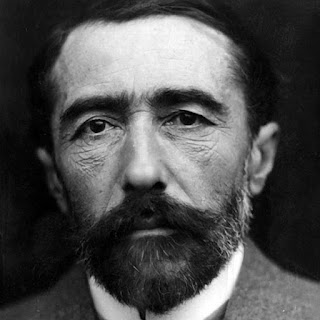 "The Secret Sharer" (1910) is by modern standards a short novella. In its day it was a long short story originally published in Harper's Magazine.


Needless to say, we find ourselves aboard ship in exotic waters, in this case the Gulf of Siam. Our 'hero' is the new captain, two weeks into his first command and struggling to exert his authority over the junior officers. He finds relief by spending the night on deck - until he looks down and sees what seems to be a naked, headless body floating in the water. In fact it's a living man who, once aboard and seen in the ship's night lights, is extremely like the captain himself.


The newcomer, Leggatt, was first mate of a ship becalmed nearby. He too was an outsider, who had to demonstrate his authority. Unfortunately this led to the death of a seaman. Leggatt was locked in his cabin until he could be delivered to civilian authority. Her escaped and swam through the islands until he found the ship he is now aboard.


The captain has a decision to make. Should he return the fugitive? Should he hold him prisoner until the next decent-sized town? Or should he aid and abet? Can he bring himself to condemn someone so like himself in face and situation? That's the moral dilemma and Conrad doesn't shirk the challenge. Of course the captain makes the wrong choice - Conrad's protagonists almost always do, hence the drama - and we are soon heading into shore in the teeth of a furious typhoon that has the blood pounding in our imaginative veins.