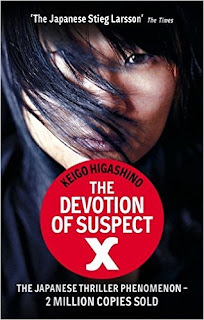 The blurb proclaims Higashino as "The Japanese Steig Larsson". No he isn't. Nor, in fairness, does he claim to be. There is no resemblance whatsoever. Larsson was a journalist who wrote his Millennium Trilogy and died mysteriously young. Higashino has been a professional writer for many years, has written loads of books for both adults and children, and is now approaching the age of sixty.

Importantly, this is in no sense a thriller. It is utterly devoid of thrills. It is instead a traditional murder mystery with an old-fashioned amateur detective helping the plodding police. The amateur sleuth - "Detective Galileo" - is a university professor of physics. He is, in other words, Sherlock Holmes, who can solve any mystery under the guise of advanced pseudo-scientific flummery.

For a writer of such experience, the style is remarkably dull. It's not poorly written - all the words are where they should be and do what they have to do - yet it seems completely shorn of ambition, artistry, or even interest. There is nothing about any of these characters to grab the reader's empathy. They seem to have no emotional hinterland. Their sole function, as Professor Yukawa says, is to be cogs in the machine of the plot.

And as for the plot...  We know who did it from the first chapter. The only mystery is how will the killer and the killer's accomplice be caught. The plot, as so often in sub-Holmesian fiction, is ludicrously convoluted, or at least is meant to appear so. In fact the disposal is exactly as I observed in my recent review of Bird in a Cage - they cut it up and chuck it in the river. The twist, described on the back as "utterly surprising", was for me at least bleeding obvious from the moment it was set up. Regular visitors to this blog will know that I do not claim to be one of those crime fiction fans who always works out the ending. In fact I hardly ever do. And that perhaps shows how easy this one was to spot. I was so disappointed - 440 pages for what barely deserved a short story.

I suppose The Devotion of Suspect X would cover a medium-haul flight agreeably enough. But if you're fully awake, your critical faculty in reasonable order, it is really not worth the effort. There is a series, apparently, of Detective Galileo novels. I shall steer well clear.
Posted by rogerwood at 12:02