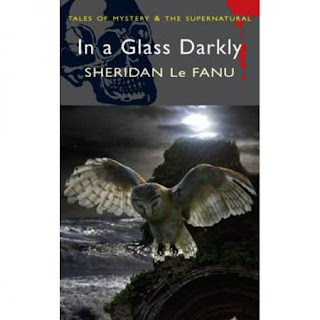 I got hold of this, Le Fanu's last book, because it is presented as highlights from the casebook of Dr Martin Hesselius, the prototype Van Helsing who oversees the vampire hunt in the magnificent Carmilla, which  I read over Christmas and which is currently one of the most viewed posts on this blog. Carmilla is indeed the fifth of the five stories in this collection. As I have already reviewed it in depth, I shan't repeat myself, especially since I didn't re-read it so soon.


As for the rest, the framing device is very thin. Dr Hesselius only features in the first story, the highly-regarded Green Tea. The story deserves its reputation. It is a truly creepy tale in which the Reverend Mr Jennings overstimulates himself with the titular brew and is consequently haunted by an evidently furious little monkey. The story's power stems largely from the fact that there is no logical reason for the manifestation nor its impotent rage against the vicar. Its main aim seems to be to prevent him taking up his comfortable country living. It operates with demonic malice. In London it will suddenly disappear for weeks on end. Jennings, hoping against hope that his torment has ended, finally risks a visit to his parish, at which point the monkey reappears. Dr Hesselius features in person. In London for some academic reason, he is approached by Mr Jennings who seeks his expert help. The help proves to be less than useless and the poor priest finally ends his suffering in the only sure way.


Next up is The Familiar, very similar to Green Tea. This time a sea captain is dogged by a malevolent midget who calls himself The Watcher, whom everyone can see but no one can catch. This time there is a reason: Captain Barton gave an order that cost a seaman his life. The Watcher is not that seaman but seems to operate on his behalf. Again, the outcome is inevitable...


...as it is in the third story, Mr Justice Harbottle. The judge is haunted by a man he wrongly sent to the gallows and ends up doing away with himself. Evidently the theme of being stalked by guilt was a preoccupation of Le Fanu in the last years of his life. Mr Justice Harbottle is the only story here that comes anywhere near the brilliance of Carmilla. That is because it shares the same undercurrent of decadence and perversion. Harbottle is a vicious hanging judge but he is also a debauchee. It is suggested he hosts orgies in his house and he is certainly shacked up with the hanged man's wife.


The fourth story, The Room in the Dragon Volant, isn't really a ghost story at all. There is a mention, at some point, that previous occupants of the said room have vanished into thin air - and have been seen doing so. That's a promising idea but goes undeveloped. Instead we have a high Gothic romance in post-Napoleonic France. It is essentially a premature burial story. Sadly, the trope only works if the victim is actually buried. Being saved in the nick of time, as our hero is here, is just plain cheating. The writing, however, is exceptionally good, probably the best-written story in the collection.


Overall, three out of five great examples of Victorian Gothic and two perfectly acceptable lesser tales is by no means a bad thing.
Posted by rogerwood at 14:51