Bird in a Cage - Frederic Dard 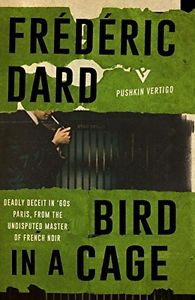 Another forgotten period gem from Pushkin Vertigo. Frederic Dard (1921-2000) was the native French equivalent of Simenon. Like Simenon, Dard churned out several hundred novels (his equivalent of Maigret was San-Antonio) and, like Simenon, he wrote so many bestsellers that he became a tax exile in Switzerland.

Like Simenon, his best novels are the standalone noir thrillers of which this is one, dating from 1961. It's very short - only 120 pages. Everything is pared down to the bone. Everything takes place on Christmas Eve and Christmas Day. Albert returns home after six years in prison. He killed his girlfriend in a fit of jealousy. His mother has died while he was away. Her flat is full of memories. He pops out for a Christmas drink. He meets a beautiful young woman and her daughter. The child is up way beyond her bedtime, so Albert carries her to the woman's apartment. He makes overtures. His overtures are not repulsed. Then things get really weird.

The twist, as so often in noir, is both breath-taking and, on reflection, really silly. Why people in noir can't simply bash their loved one's brains out and chuck them in the river is beyond me. Nevertheless, Dard has a grip like a vice on the reader's attention. The details are worked out with forensic detail. Every word and every piece of action is made to count. The metaphor of the title is beautifully played. And, best of all, Dard leaves us in suspense. Downright brilliant.﻿