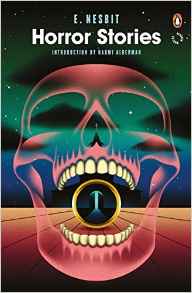 How this figures in the Penguin Worlds series of "Classic Science Fiction" is beyond me. Surely no one is more embedded in her time than Nesbit? And why we need the 500 word introduction by Naomi Alderman (co-curator) defeats me utterly. The cover couldn't be less appropriate if it tried.


That said, I was only vaguely aware that Nesbit had written ghost fiction (and it is very much ghost fiction we are talking about here). I think I may have come across "Man-Size in Marble" many moons ago, but that's about the extent of my knowledge.


Anyway, Nesbit is known today for her books for under-sixteens, The Railway Children (1906) of course, but also The Phoenix and the Carpet (1904). Her ghost stories were written for magazines and periodicals before she became famous and collected in three volumes between 1893 and 1897. Though they often go back to events in the mid-Victorian period when Nesbit herself was a young woman, the starting point is always the last twenty years or so of the 19th century. Surprisingly they are rarely written from the female viewpoint - she adopted the sexless 'E' of her authorial persona for a reason - and the female characters tend to be weak, doting and simplistic. Her heroes are young men about town, often priggish, very much devoted to their social status, hot-blooded and rash in their decisions. Nesbit has an habitual tone in which all her characters are depicted critically. She has a marvellously brisk way with back-story, which should be an object lesson to us all. Take this from "The Three Drugs":


The nature of his trouble is not germane to this story. There was a woman in it, of course, and money, and a friend, and regrets and embarrassments - and all of these reached out tendrils that wove and interwove till they made a puzzle-problem of which heart and brain were now weary.

The usual framework is a love affair, either ill-judged or doomed. She is preoccupied with the idea of the loved one's return from the dead. There are a couple of exceptions: "The Three Drugs" and "The Five Senses", which I suppose just about qualify as early science fiction. In both cases medical men experiment with medically enhanced consciousness; in both cases the experimenters are themselves overwhelmed. They were highlights of this collection for me, but there was only one item I disliked - a something-and-nothing fragment called "The Judgement: A Broadmoor Biography", which sounds much more enticing than it actually is. It only lasts four pages and is an ill-advised venture into first-person dialect. It smacks of bottom-drawer material which should have been binned or otherwise forgotten. My advice is to skip it and enjoy everything else here. It's a collection which every student of the genre should read at least once.
Posted by rogerwood at 14:42