The beauty of ebooks is that you can download one for under £1 in a click. You don't have time or need to speculate. If it's not up to scratch, no biggie. I bought the first Rebus when it came out in paperback, probably in the early Nineties. I still remember how disappointed I was. The plot was nothing much to write home about and the detective's name was just plain silly. I have to say I didn't think much of the early TV adaptations either - the ones starring John Hannah - though they did improve when Ken Stott took over, and Stott remains the model for the Rebus in my head.

Anyway, last week Let it Bleed was on offer and I thought what-the-hey? It's halfway through the series and sure enough Rebus has amassed sufficient character to make time spent in his company enjoyable. The new edition has exclusive extra material from Rankin which for me was best avoided. I really don't need insights into the authorial psyche unless they are incorporated into the main text. 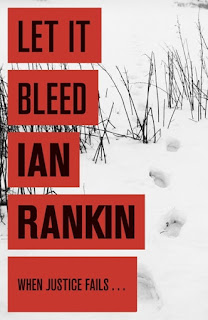 The story itself is very much of its era, the mid-Nineties, when the UK was finally waking up to the legacy of the Thatcher free-marketeers. Entrepreneurship has corrupted every aspect of public life. The legerdemain that Rankin pulls off here is very impressive; he sends us off in pursuit of the usual suspect who turns out to be the wrong suspect. Rankin at this period was not great at the intricacies of the police system (though he is now with his Malcolm Fox series) and Let It Bleed succeeds principally because Rebus is working off the books, which gives him something to lose - his career, the only things he has to keep him from out-and-out alcoholism - if it all goes pear-shaped.

There's something else here which, for me at least, the early books lacked, and that's compassion. The alkies and the junkies and the petty criminals are all real people, the real bad guys - the upwardly mobile - perhaps slightly less so. This enables flashes of wit that really humanise Rebus's world without distracting from the seriousness of the plot.

In short, then, I enjoyed it. The name Rebus is still silly, but after all this time what can Rankin do? I can't help wondering if the Rebus/Fox mash-up Even Dogs in the Wild (2015), presumably a sort of Edinburgh version of Superman meets Batman, might offer me the perfect Rankin experience.
Posted by rogerwood at 13:04