The World in Winter - John Christopher 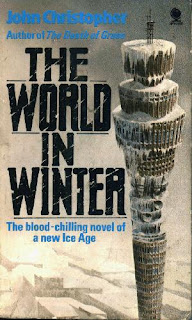 John Christopher has often been likened to John Wyndham. Indeed, some people seem to think the two are one and the same, especially given the number of pseudonyms they both used. In fact John Christopher was Sam Youd (1922-2012) aka Stanley Winchester, Hilary Ford. Peter Graaf etc. Christopher was undoubtedly influenced by Wyndham (for Tripods see Triffids) but specialised in man-made catastrophe whereas Wyndham favoured space invaders.

Christopher is best known for his climate change novels, of which this is one. The title says it all: the northern hemisphere is plunged into a new ice age due to a decline in solar radiation. The major powers decide to pack up and head south. Those left behind turn feral through necessity. The emigrants likewise face disaster. The former colonies in Africa are perfectly willing to accept their former oppressors, but only as menials and slaves. The banking system collapses so all the money the Brits brought with them evaporates.

It is a great idea and even now, more than half a century after it was written, the resonances are still there, Christopher's problem is that he can't bring his ideas to life through his characters. His main characters here are preoccupied with their suburban menage a trois and unable to engage with their climatic enemy as much as one would like. Perhaps the scale of the disaster is just too big and humanity simply cannot win.

This is where Christopher falls short of Wyndham. I remember reading one of the Tripod series for young adults, probably the late prequel When the Tripods Came (1988) and the problem was the same. That said, there are some fabulous moments - I absolutely adored the idea of colonising the south coast of England by hovercraft, which of course can skim over the ice sheets blocking the Channel. It works even better fifty years later when hovercraft have become as redundant as traction engines. Perhaps that's something we should reconsider in this era of global warming.

Email ThisBlogThis!Share to TwitterShare to FacebookShare to Pinterest
Labels: climate change, day of the triffids, fiction, John Christopher, John Wyndham, post apocalypse, sci fi, the coming of the tripods, The World in Winter