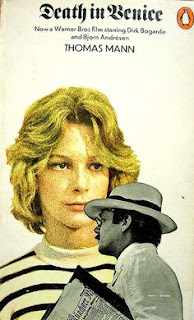 Thomas Mann is one of those literary greats I have often wondered about but never actually read, I bought this novella when it came out, as a film tie-in, in 1971. It has waited, unread, on my shelves ever since. I've never even bothered to see to the Visconti movie, or the Britten opera.

Well, now I've read it. It dates from 1912, more or less the middle of Mann's life. He was too young to be the hero Gustave von Aschenbach, and all bar one of his major works were yet to be written, Buddenbrooks (1902) being the single exception. Nevertheless, in terms of sexuality, Aschenbach is an extreme version of the author. Mann's bisexuality only became known when his diaries were published long after his death. He married and had several children. Aschenbach is alone, having sacrificed all semblance of a private life for his highbrow literary art.

One evening in Munich, he is overwhelmed by the need to break his rigid routine and take a holiday. He begins in Trieste, which doesn't suit, and ends up in Venice. Staying in the same hotel is a Polish family - a mother, presumably widowed, several straitlaced daughters and young Tadzio, a pubescent boy of extraordinary beauty. Aschenbach is entranced. He observes the boy from a distance, interest becomes an obsession, obsession becomes infatuation.

And at that moment of self-recognition, cholera breaks out in Venice. Aschenbach knows he should leave but cannot tear himself away from the daily sight of Tadzio in his sailor suit. He wonders if Tadzio is a sickly child who will not live to be an adult. He allows the hotel barber to dye his hair and pluck his eyebrows and rouge his cheeks to try and mask the vast difference in age - but Aschenbach, of course, is the one who is sick, who cannot accept that the boy's beauty will one day coarsen and fade.

Reading the novella today, you have to wonder to what extent this is paedophilia. In 1971 we would never would have. Hard as it is to believe today, in the age of free love we never countenanced such transgression. How then did Mann view his protagonist in 1912? He is well aware of the corruption, of course. That is why he chooses Venice, all facade for the tourists, literally plastering over the corruption and decay that hides behind. That is the meaning of the cholera outbreak, which the hoteliers, of course, pretend isn't happening - only a British man working in a German bank tells Aschenbach the truth.

Is it also, I wonder, the reason for the overly-elaborate writing, the various passages of high-minded pontification on the subject of Eros and love. Is he really saying to us that in the ends it's all about sex, and that literature that considers itself above or better than humanity is pointless?
Posted by rogerwood at 15:03