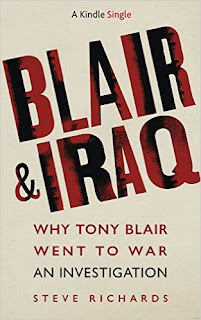 Steve Richards is unusual among political commentators. He knows what he is talking about because he has been there and done it. He makes his own judgements and is not overswayed by the political agenda of his rather dubious employers. I used to read him assiduously in The Independent before the Russian takeover. He may still have connections with the 'i' but since that was taken over its political stance has been become slightly to the right of Nigel Farage and I wouldn't touch it with the proverbial ten-foot-pole grasped in asbestos gauntlets.

To return to Blair and Iraq. The timing is perfect, given the arrival of the long-awaited Chilcot report in the next few days. I suspect his conclusion is different from the Chilcot view, even after redaction. Richards' argument is that Blair's agenda was not a crazed crusade but the logical consequence of his determination to make Labour electable again. He and his New Labour cronies believed that the public would not back a party that was anti-American and could not countenance armed intervention. Clearly, then, he put both those failings right in Iraq - and made Labour unelectable for a generation.

Perhaps Richards will expand the book in the wake of Chilcot. As it stands, this is the beauty of Kindle Singles - a book exactly as long as it needs to be.
Posted by rogerwood at 15:03