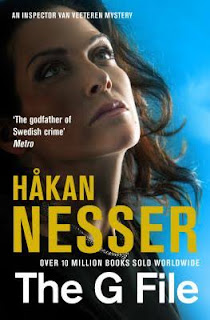 The G File, published in Sweden in 2003, is the final novel featuring Inspector Van Veeteran. Nesser long since got himself in a tangle by retiring his protagonist far too early in the series. Some of the later Van Veeterans scarcely feature our hero at all. The problem is solved very easily and effectively here. The key murder takes place in 1987, when VV is barely into his fifties and still unhappily married. A glamorous American commissions disgraced cop turned private detective Maarten Verlangen to watch her husband. A couple of days later, the woman is found dead in her diving pool. She apparently dived in before checking for water. The obvious subject is her husband. Unfortunately he has a cast iron alibi - he was drinking in a restaurant with Verlangen, having recognised him as the cop who got him sent down for drug dealing.

Van Veeteren leads the murder investigation. He too knows the suspect Jaan G Hennan - known as G to distinguish him from the other Jaan Hennan in the school, obviously. At school G was a bully and a bastard. VV wouldn't put any crime past him. His suspicions seem to be confirmed when it turns out G took out a substantial life insurance policy in America - much as he did when his first American wife mysteriously disappeared a couple of years earlier.

It's obvious G is guilty. But can they prove it? No - and we cut to 2002. VV is retired now, and working in the antiquarian book shop. But he can't resist a return to the case when Verlangen goes missing. Especially since Verlangen had told his son that he'd finally got a break on the Hennan case. The evidence leads VV to Kaalbringen, scene of the axe murders featured in Borkmann's Point. To say more would be to risk giving the game away. Suffice to say, the twist is a corker. I definitely didn't see it coming.

The G File, with its cunning time structure and extra length (600 pages in the paperback above) is not only a fitting end to the ten-book series, it is by some distance the best of the later post-retirement Van Veeterens.

Other Van Veeteren novels featured on this blog:
THE WEEPING GIRL
HOUR OF THE WOLF
THE RETURN
THE UNLUCKY LOTTERY
THE INSPECTOR AND SILENCE 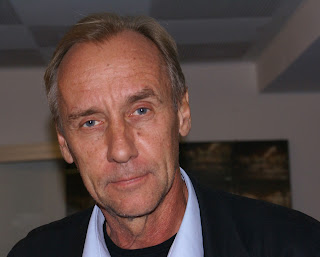 Where to next for Nesser? He has already published five novels featuring Inspector Gunnar Barbarotti, a Swedish cop of Italian descent, and his latest standalone novel - horribly and pointlessly previewed in the back of the Pan Macmillan paperback - is set in, of all places, Somerset. Hakan certainly gets around.
Posted by rogerwood at 17:59