Return of a King - William Dalrymple

Obviously I'd heard of this book, which received a huge amount of cross-media free publicity when it came out in 2013. I approached with caution because that level of freebie usually means one of three things: the author is an ex Tory MP, the author is phenomenally rich and/or well-connected, or it really is an astonishingly important book. The name Dalrymple (actually a cut-down version of the hyphenated original) rightly suggests the middle category, but luckily for us he is also a writer of genius, a historian who delves into archives which average scholars couldn't begin to tackle and surprisingly even-handed in his judgments. For example some British military men were complete idiots, others were astonishingly brave. Some were just incredibly lucky or indeed unlucky. The Afghanis who sucked up to, repulsed and then were butchered by the British are duplicitous, chivalric, noble, homicidal and generous. Everyone here, even the inbreds of both camps, is a real, three-dimensional human being. 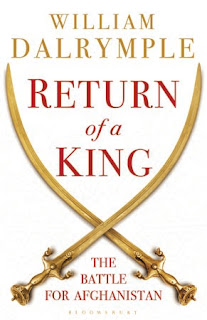 This then is the story of the First Afghan War 1839-42. For reasons never entirely clear, the British decided to replace Dost Mohammad Khan, the perfectly friendly ruler of the always fractious mountain people with the man he deposed thirty years earlier, Shah Shuja. The replacement itself went surprisingly well, but everyone including the man himself knew that Shuja was simply a puppet of the 'envoy' Sir William Hay Macnaghten. A dyed-in-the-wool diplomat who knew nothing about tribal culture, Macnaghten was given to machinations and, far worse, often late in paying the pensions (bribes) which kept the peace between the rival chieftains. Over time, the Afghani leaders waxed nostalgic for the long golden age of Dost Mohammad. There was a king who was approachable, fair, and who paid his bribes on time.  Rebellion broke out. The idiots in India and their envoy in Afghanistan all misread the situation, and unbelievable bloodshed resulted. Very few Brits and hardly any of their sepoys made it out alive.

This to me was the most emotive part of the story. Dalrymple pulls no punches and his description of the disastrous retreat through the Khyber Pass in January blizzards is truly shattering. The Afghans who enslave and mutilate their captives are named and shamed. Yet he contrasts the behaviour of the outlying villagers with that of Dost Mohammad's son Akbar Khan who personally slew Sir William Macnaghten but who protected Macnaghten's widow and the wives and children of officers who were in the field against him with courtesy that would shame the Geneva Convention.  One fascinating aside, expertly handled by Dalrymple, is the escape of these hostages and their long journey to freedom, effectively under the command of the more mature women.

Then comes the Army of Retribution - and we should be thoroughly ashamed that we ever had such a force.  The new Tory government in London could not let such an affront to British arms go unavenged. So the army returned, with capable commanders, killed all who could not prove themselves friends of the young Victoria's fast-expanding empire and reduced the historic cities of Afghanistan to sand.

But the Afghans were not conquered. The Afghans are never conquered. The Army of Retribution came, slew and destroyed, but then withdrew and left Dost Mohammad to it.  Dalrymple is right to draw the parallels with today.  We Brits have just 'withdrawn' from our fourth invasion of Afghanistan, so that's 4-0 to the Afghanis.  Those guys even saw off Soviet Russia for Pete's sake!

I knew nothing whatever about this subject before reading Return of a King. I am now fascinated. That is surely the aim of the popular historian. Job done, then.
Posted by rogerwood at 17:49