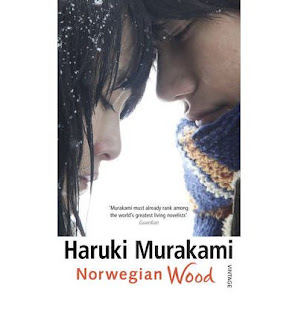 This is Murakami's 1987 breakout novel, the one that made him a bestseller in Japan and successful around the world. This was because of its universality - ostensibly your basic rite of passage story - its apparent simplicity and its slightly offbeat characters. Typically for Murakami, the protagonists are welded in sexless love. Watanabe loves Naoko. Naoko loves Watanabe but cannot have penetrative sex with him (though they have plenty of non-penetrative) because she is still mourning her childhood sweetheart Kizuki, who also happened to be Watanabe's best friend. Kizuki killed himself at 17. Watanabe and Naoke have both gone to university in Tokyo, although they attend different ones. Watanabe loses Naoke when she enters a sanatorium to try and get over her grief. Left to his own devices Watanabe trails along in the wake of the dormitory Lothario Nagasawa, who picks up girls for them both, has sex with them and dumps them. Nagasawa is fully aware of his shortcomings, but accepts the way he is. After all, he is open with his longtanding girlfriend Hatsumi - there is no deceit involved with her or with the pick-up girls. Hatsumi quite likes Watanabe and would have sex with him, were it not for Nagasawa.  Meanwhile Watanabe visits Naoko at the sanatorium and meets her room-mate, the forty-year-old musician Rieko, who has been there seven years. Naoko and Rieko sleep together. Watanabe has sex with neither. Back at university, he meets a fellow drama student, the ultra-cute Midori, who would like to have sex with him but....

So it's not quite your usual rite of passage scenario. More a case of - boy meets girl, boy loses girl, boy has lots of girls, boy meets two more girls and a woman, boy cannot have any of them, but he finally loses the first girl, has sex with the woman, and decides to take up with the girl he should have focused on all along. Typical Murakami after all.

The beauty is the simplicity. Like the song, which Watanabe hears many years later in Hamburg (which then provokes his memory of Naoke, whose favourite song it was), the writing is incredibly simple yet exceptionally captivating. The translation here, by Jay Rubin, strikes what is surely the right note. The chronology seems to be straightforward but in fact a vast amount of backstory is sneaked in, even for comparatively minor characters. There is a regular use of letters between the principals in which they can reveal truths to one another which they could not say in person. Truth and untruth is one of the themes of the novel - Nagasawa is the extreme example of someone who is brutally honest about his actions whilst fooling himself that admitting his betrayals somehow legitimises them. Reiko is his opposite; again painfully honest about her past life, she excoriates herself unnecessarily. Nobody ever seems to tell the whole truth to Naoke and Watanabe  does his best but has no real idea about his true feelings. Discovering them, embracing them, is his coming of age (he is still only twenty-one at the novel's end). The exquisite final paragraph suggests that he has just for him the real journey is only just beginning.

Because I have come at Murakami the wrong way round, reading his most recent and ambitious work first, I was initially slightly disappointed with Norwegian Wood because it seemed so simple and unambitious. But I stuck with it and discovered the true depth and complexity. I cannot pick favourites. Read them all is my advice. 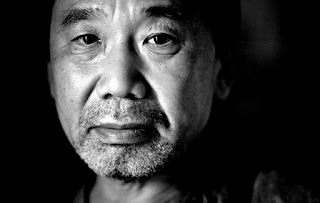 OTHER MURAKAMI NOVELS DISCUSSED ON THIS BLOG:

1Q84 Book 3
COLORLESS TUKURU TAZAKI AND HIS YEARS OF PILGRIMAGE
Posted by rogerwood at 15:31