First the Wall came down, then the Soviet Union fell apart. The Nineties were a decade in which old enemies lost their edge, former certainties simply evaporated. Eastern Europe suddenly comprised new counties and potential states we had never heard of and knew absolutely nothing about. Chechnya, South Ossetia and, most relevant to le Carre's 1995 novel, Ingushetia - which I have still never heard of.

Many spy writers went out of business overnight, or turned to period espionage fiction. Le Carre, the great master of the form, used his genre to explore the uncertainties. Tim Cranmer is an old-style spy - Winchester, the Treasury - put out to grass. Fortunately he is stinking rich, his inheritance including a Somerset manor and vineyard. His schoolfriend Larry Pettifer, the enfant terrible of Soviet Studies in his day, was Cranmer's agent and later double agent. Old Wykehamists look after one another, and Cranmer has found flighty Larry a sinecure at Bath University. Larry has repaid the favour by absconding with Timbo's trophy girfriend Emma. Then Larry is reported missing. The police call on Cranmer. This comes as surprise to Cranmer, who thought he might have killed his friend some weeks before he went missing.

Has Larry gone back to the Game? Has he involved Emma? Cranmer sets out to find them, his quest taking him from Paris to the wild homeland of the Ingush. I'm not sure that the enigma is ever fully resolved  but what we do get is a vivid picture of one of the world's largest landmasses, a political empire, at the moment of implosion, and the black hole lurking beneath.

Our Game is not le Carre's finest novel. It is not an easy read - it is by no means an easy subject - yet it contains some of the master's finest writing.  He has to stretch his vocabulary in order to pin down the themes that emerge as the exercise progresses.  It is therefore a key work, not only within le Carre's oeuvre, but within the spy genre itself.

And this cover, on the Penguin Classic ebook, has to be the best of any le Carre ever... 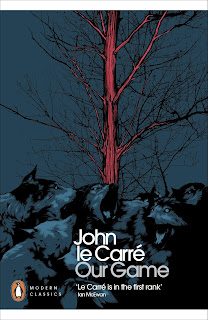